Hoddesdon is in Hertfordshire, situated in the Lea Valley. The town grew up as a coaching stop on the route between Cambridge and London. It is located 4 miles southeast of Hertford and 5 miles north of Waltham Cross. At its height during the 18th century, more than 35 coaches a day would pass through the town. It saw a boom in the mid-20th century as gravel was extracted from the area to be exhausted by the 1970s. The lakes and water pits left behind have been used for local leisure amenities. Today, Hoddesdon has a little light industry but is mainly a London commuter belt town. The name "Hoddesdon" is believed to be derived from a Saxon or Danish personal name combined with the Old English suffix "don", meaning a down or hill. The earliest historical reference to the name is in the Doomsday Book. By the mid-19th century the town still consisted principally of one street, and had a population of 1,743. Malt was being produced and transported to London via the River Lea. There were also a number of flour mills. Trade in Hoddesdon was centred on the hops market each Thursday. As time went on, more and more hops were carried on the river rather than the roads and the Wednesday meat market took predominance. Following the Second World War Hoddesdon increasingly became a dormitory town, forming part of the London commuter belt. Much of the town centre was demolished in the 1960s and 1970s, with the construction of the Tower Centre and Fawkon Walk shopping centres. The opening of a bypass in 1974 changed the nature of the town, with through traffic curtailed. Hoddesdon has a sizeable Italian community. Italians emigrated to the Lea Valley in the 1950s and 60s to work in the nearby garden nurseries, and they and many of their descendants still live in the area. The Festival of San Antonio is celebrated annually in June in the town with a street procession, although nowadays it is a low-key festival since many of the participants are elderly. 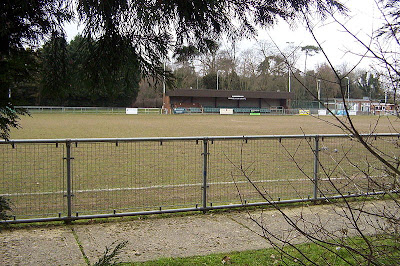 Hoddesdon Town F.C. is an English football club based in Hoddesdon, Hertfordshire. The club was established in 1879, and claims to be the third oldest club in Hertfordshire. They were the inaugural winners of the FA Vase in 1975. Hoddesdon Town have played at Lowfield since 1899 since moving there to share with the local cricket club. The ground was originally part of the High Leigh Estate, but was purchased for the town in 1924. The clubhouse was erected in the 1950s. 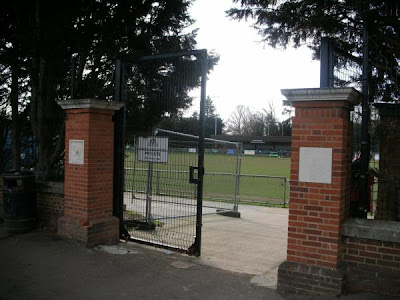 This Pieman visited Lowfield for a very competitive East Anglian Cup tie against Bishop's Stortford. I had travelled to Broxbourne station from where a twenty minute stroll enabled me to reach the ground. The ground is situated just behind the main shopping street within Barclay Park. The visitors progressed to the next round, winning by the odd goal in five.