Crawley is a town in West Sussex, England. It is 28 miles south of Charing Cross and 18 miles north of Brighton. The area has been inhabited since the Stone Age, and was a centre of ironworking in Roman times. Crawley developed slowly as a market town from the 13th century, serving the surrounding villages in the Weald; its location on the main road from London to Brighton brought a passing trade, encouraging the development of coaching inns. It was connected to the railway network in the 1840s. Gatwick Airport, now one of Britain's busiest international airports, opened on the edge of the town in the 1940s, encouraging commercial and industrial growth. After the Second World War, the British Government planned to move large numbers of people and jobs out of London and into new towns around South East England. The New Towns Act 1946 designated Crawley as the site of one of these. 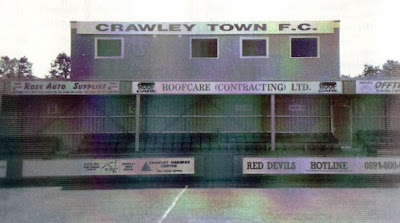 Formed in 1896, Crawley Town became founding members of the West Sussex Football League that year, joining the Junior Division. They remained in the West Sussex league for five years before transferring to the Mid-Sussex League, winning the League in only their second season.  They have played at Town Mead since 1949. Crawley turned semi-professional in 1962 and the following year they joined Division One of the Southern League. In 1969 they were promoted to Premier Division of the Southern League but the joy was short lived as the following season they were relegated back to the first division where they remained until the 1983–84 season. The club has enjoyed many cup successes, winning the Sussex Professional Cup in 1970, the Gilbert Rice Floodlight Cup in 1980 and 1984, the Southern Counties Combination Floodlight Cup in 1986, and the Sussex Senior Cup in 1990 and 1991.