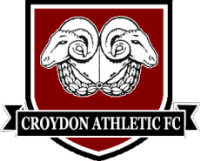 Croydon is mentioned in the Doomsday Book, and from a small market town has expanded into one of the most populous areas on the fringe of London. Thornton Heath is a district of south London, England, in the London Borough of Croydon. It is situated 7.2 miles south-southeast of Charing Cross. Signs of a Neolithic settlement, including flint axe-heads, were discovered and recorded in the area now known as Thornton Heath Pond during 19th century excavations to build a tram terminus for the developing suburb. The London to Sussex road was originally a Roman construction which passed via Thornton Heath to Croydon along a section still called Roman Way. Parts of the original structure were said to have been visible close to the Thornton Heath area as late as 1800.


Croydon Athletic FC was founded in 1986.  The club was a merger between Wandsworth F.C. and Norwood F.C. and was initially named Wandsworth & Norwood until 1990 when the club's name was changed to Croydon Athletic. The merged club initially played in the London Spartan League, where they were promoted to the Premier Division in 1986–87. In 1988–89 they missed out on the Premier Division title on goal difference. This Pieman visited the NFC Sports Ground on a midweek evening after work. Travelling to Norbury station the ground was a little over ten minutes walk from there. The visitors from Enfield, Brimsdown Rovers, claimed a point from this match with a battling draw.