Ashford is a town traditionally in Middlesex, but administered by the Surrey borough of Spelthorne. It is a suburban development situated 15 miles west south-west of Charing Cross and forms part of the London commuter belt. Spelthorne is an area of mostly greenbelt land, rivers, flood plain and reservoirs. Ashford is almost completely surrounded by the latter: in particular the Staines Reservoirs to the north east (now a bird sanctuary) and the Queen Mary Reservoir to the south. These reservoirs, resulting from gravel extraction, are part of the water supply network. Bobby Davro originates from Ashford!

Ashford Town FC was established in 1958 as Ashford Albion, the club initially played in the Hounslow & District League. They won two consecutive promotions to reach the Premier Division, and in 1964 adopted their current name. The club was reconstituted in January 1965 and climbed back through the divisions of the Hounslow & District League before joining the Surrey Intermediate League (Western) in 1967. Ashford Town were immediately promoted to the top division of this competition and were Champions in 1974–75. They became founder members of the Surrey Premier League in 1983. In 1990 they joined the Combined Counties League.

This Pieman visited Short Lane after work on a Tuesday evening. I travelled from London Waterloo to Ashford and would estimate it took about half an hour to walk from the station to the ground, which is located at Stanwell. The home side were comprehensive victors over their Hampshire visitors by four goals to one. 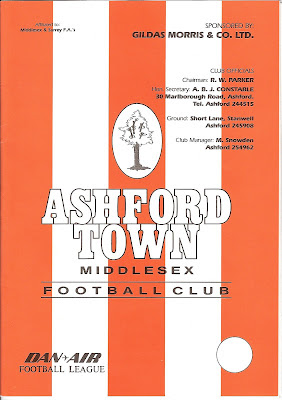