Hayes is a town in west London in the London Borough of Hillingdon. The place-name Hayes comes from the Anglo-Saxon for land overgrown with brushwood. Following development in the late 19th and 20th Centuries, industry became pre-eminent in Hayes. The provision of adequate housing did not begin until after World War I, with the creation of dwellings of the garden suburb type. George Orwell, who adopted this pseudonym while living here, lived and worked in 1932-3 as a schoolmaster at The Hawthorns High School for Boys, situated on Church Road. The school has since closed and is now known as The Fountain House Hotel; the hotel bears a plaque commemorating its distinguished former resident. Despite returning several times, Orwell was characteristically acerbic about his time in Hayes, camouflaging it lightly as West Bletchley in Coming Up for Air, as Southbridge in A Clergyman's Daughter, and grumbling comically in a letter to author/friend Frank Jellinek: “Hayes . . . is one of the most godforsaken places I have ever struck. The population seems to be entirely made up of clerks who frequent tin-roofed chapels on Sundays and for the rest bolt themselves within doors.” During the First World War the EMI factories produced aircraft. Charles Richard Fairey was seconded there for a short time, before setting up his own company, Fairey Aviation (later merged with Westland), which relocated in 1918 to a large new factory across the railway in North Hyde Road. Over 4,500 aircraft were subsequently produced here but Fairey needed an airfield to test these aircraft and in 1928 secured a site in nearby Heathrow. This became the Great West Aerodrome, but was requisitioned by the Air Ministry in 1944, and initially developed as a heavy bomber base intended for Boeing B-29 Super fortresses but when Second World War ended in 1945, it was taken over by the Ministry of Aviation and became Heathrow Airport.

Brook House was formed in 1974 as a pub team for the pub of the same name and first played in the Hayes and District Sunday League Division 7. In 1982, another local team, Grange FC, relocated to Brook House's recently acquired Park Farm ground and were reborn as the Brook House FC Saturday team, playing in the South West Middlesex League. By 1984 the first team became founder members of the Middlesex County Football League where they remained until 1988, when they joined the London Spartan League, stepping up to its Premier Division the following year. In 1992 floodlights were erected at Farm Park.

This Pieman visited shortly afterwards, witnessing a competitive 1-1 draw with Beaconsfield United. The journey was made from London Paddington to and from Hayes and Harlington from where I walked to the ground. 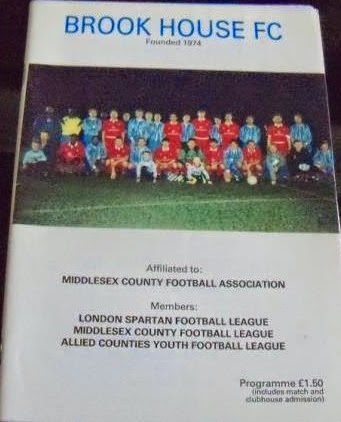