Stanstead Abbotts is a village and civil parish in the district of East Hertfordshire. It lies on the county boundary with Essex, and is situated approximately 5 miles south south east of Ware, 6.5 miles south east of Hertford, 3 miles north north east of Hoddesdon and 5 miles west of Harlow. The village is separated from the village of Stanstead St Margarets by the River Lea. The village's name was recorded as "Stanstede" at the time of the Doomsday Survey in the late eleventh century. In the twelfth century the manor passed to the abbot of Waltham Holy Cross. By the fourteenth century the suffix "Abbatis", "Abbotts" or "Abbot" formed part of the parish's name. The abbey continued possession of the manor until its dissolution in 1531. The manor of Stanstead Abbotts was granted to Anne Boleyn and remained with the crown after her execution. In 1559 Queen Elizabeth granted it to Edward Baeshe and it remained in the Bashe family for several generations. The football club was founded in 1894 as Stanstead Abbotts FC, with their home at Mill Field, Cappell Lane in Stanstead Abbotts. Prior to 1940 they played in the Herts County League, East Herts and Hertford & District Leagues and were winners of the local Graphic Cup during the 1920s and 1930s. After 1945 the Club played in the Waltham & District League, re-joining the Herts County League, in season 1947–48. In their first season back in the Herts County League the Club won Division Two, gaining promotion and also winning the Aubrey (League) Cup. In 1962 the Club moved to their present location, St Margaretsbury Recreation Ground, one of the conditions being they change their name to St Margaretsbury FC. The Croft family, the previous owners of the ground, agreed the sale to three parishes, Stanstead Abbotts, Great Amwell and St Margarets, providing that it was used for sporting and recreation purposes. It was also a condition that the ground should be known as St Margaretsbury Recreation Ground. St Margaretsbury Cricket Club has used the ground since 1946 and in 1962 the St Margaretsbury Tennis Club was founded. The Club's next honour was in 1972 when again they won the Aubrey Cup. In 1985–86 they entered the FA Vase competition for the first time and although losing out in the 3rd round, they played to a record crowd of almost 400. In the same season the Aubrey Cup Final was also strongly contested with Wingate FC winning 3–1. After a spell of 10 years in the Premier Division the 1st XI were briefly relegated to Division One at the end of the 1987–88 season, but returned to the Premier Division at the start of 1991–92. After a spell of 44 continuous years in the Herts Senior County League the 1st XI became members of the London Spartan League, Premier Division for the 1992–93 season.

This Pieman travelled by train to St Margarets station which is around a 5 minute walk from the St Margaretsbury Recreation Ground. In what was the home side's first home match in the London Spartan League, Waltham Abbey FC was beaten 2-1. 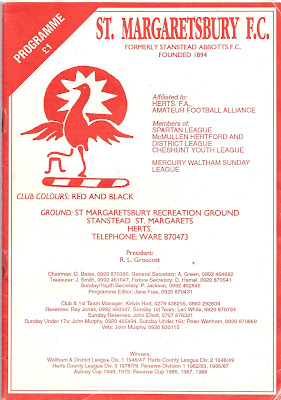