Thame is a market town and civil parish in Oxfordshire, about 9 miles east of the city of Oxford and 7 miles southwest of the Buckinghamshire town of Aylesbury. It derives its toponym from the River Thame which flows past the north side of the town. By 1813 Thame had a workhouse in Wellington Street. In 1826 John Boddington, a miller who had been the proprietor of Thame Mill, became master of the workhouse. In 1831 his son, also John Boddington, became a clerk at Strangeways Brewery in Manchester. A younger son, Henry Boddington, who had been born at Thame Mill in 1813, followed his brother and joined the same brewery in 1832. Henry became a partner in the business in 1847 and sole proprietor in 1853, after which its beers were called Boddingtons. Thame railway station was opened in 1862 as the temporary terminus of an extension of the Wycombe Railway from High Wycombe. The extension was completed in 1864 when it reached Oxford. In 1963 British Railways withdrew passenger services between Princes Risborough and Oxford and closed Thame station, leaving Princes Risborough (7 miles) as the nearest passenger station until 1987. A large prebendary building in Thame now known as the Prebendal, close to St Mary's Church, was originally the residence of the Bishop of Lincoln's prebendary. It is known to have existed by 1234 and is now a private residence and home of singer/songwriter Robin Gibb of the Bee Gees.

Thame United were formed in 1883 and spent their early years playing in local Oxfordshire leagues. In 1959 they stepped up to the Hellenic League, where they were league champions in 1961–62 and 1969–70 and runners-up on three other occasions. In 1988 the decision was taken to switch to the South Midlands League. In three seasons in this league United finished runners-up twice and then claimed the league title in 1990–91, which saw them promoted to the Isthmian League Division Three. Thame United play their home games at Windmill Road Stadium. 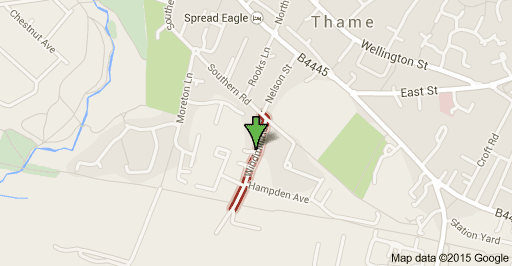 A walk to and from Hadenham & Thame Parkway railway station did not take long and following a decent couple of hours in the town centre, an excellent hard fought cup tie was witnessed with the visitors from Hampshire emerging winners by the odd goal in five.