Welwyn Garden City was founded by Sir Ebenezer Howard in the 1920s following his previous experiment in Letchworth Garden City. Howard had called for the creation of planned towns that were to combine the benefits of the city and the countryside and to avoid the disadvantages of both. The Garden Cities and Town Planning Association had defined a garden city as "a town designed for healthy living and industry of a size that makes possible a full measure of social life but not larger, surrounded by a rural belt; the whole of the land being in public ownership, or held in trust for the community." In 1919, Howard arranged for the purchase of land in Hertfordshire that had already been identified as a suitable site. On 29 April 1920 a company, Welwyn Garden City Limited, was formed to plan and build the garden city, chaired by Sir Theodore Chambers. Louis de Soissons was appointed as architect and town planner and Frederic Osborn as secretary. The first house was occupied just before Christmas 1920. The town is laid out along tree-lined boulevards with a neo-Georgian town centre. It has its own environmental protection legislation, the Scheme of Management for Welwyn Garden City. Every road has a wide grass verge. The spine of the town is Parkway, a central mall or scenic parkway, almost a mile long. The view along Parkway to the south was once described as one of the world's finest urban vistas. Older houses are on the west side of Parkway and newer houses on the east side. The original planners intended that all the residents of the garden city would shop in one shop and created the Welwyn Stores, a monopoly which caused some local resentment. Commercial pressures have since ensured much more competition and variety, and the Welwyn Stores were in 1984 taken over by the John Lewis Partnership. During World War II the Special Operations Executive (SOE) had a research department in the town, the Inter-Services Research Bureau, which developed the Welrod pistol and the Welgun sub-machinegun. Station IX was a secret SOE factory making commando equipment at the old Frythe Hotel. In 1948, Welwyn Garden City was designated a new town under the New Towns Act 1946 and the Welwyn Garden City company handed its assets to the Welwyn Garden City Development Corporation. Louis de Soissons remained as its planning consultant. That year The Times compared Welwyn Garden City with Hatfield. It described Welwyn Garden City as a world-famous modern new town developed as an experiment in community planning and Hatfield as an unplanned settlement created by sporadic building in the open country. "Welwyn, though far from perfect, made the New Towns Act possible, just as Hatfield, by its imperfection, made it necessary." In 1966, the Development Corporation was wound up and handed over to the Commission for New Towns. The housing stock, neighbourhood shopping and green spaces were passed to Welwyn Hatfield District Council between 1978 and 1983. 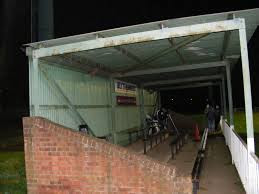 Founded in 1921, Welwyn Garden City FC started their days in the Metropolitan League. The Club then moved to the Spartan League, for the first of two spells, in 1927. During the 1927/28 season the Club gained its first honour, winning the Herts Charity Shield, beating Hoddesdon Town 5-2. In 1952 Welwyn Garden City joined the London League, later to become the Greater London League. At this time the Club were managed by Harry Hibbs, the one-time England goalkeeper, Harry being one of two ex-internationals to be in charge of ‘The Citizens’, the other being Alex Massie who was capped North of the border. 1954 saw the Club return to the Spartan League and two years later they were elected Associate Members of the Football Association. The next stop was county football with a move to the Herts County League in 1959. The Club moved to its present home, Herns Lane, in 1968 and staged their first fixture at senior level, against Knebworth in the Aubrey Cup, on the 16th November that year. In 1973 Welwyn Garden City joined the South Midlands League and won the Premier Division championship at the first attempt. The following season they reached the final of the League Challenge Trophy, only to be beaten by Barton Rovers, 3-1 on aggregate. 1976/77 saw the Club lose their top-flight status, and there began a five-year battle to reclaim it. During these First Division years the Club were to finish no lower than 5th and in 1981/82, the championship winning year the Club scored over 100 league goals en route to the title. In the championship year the Club also reached the final of the League Challenge Trophy, but once again had to settle for runners-up, this time losing 3-0 on aggregate to Stotfold. 1984/85 brought about cup success at last, when under the management of John Sneddon they beat Pirton 2-0 to lift the first ever Herts Senior Centenary Trophy. At the end of the season John Sneddon decided to call it a day and he was replaced in the close season by ex-Sudbury Court boss, Ray Sullivan, and his first task was to rebuild the side. Twelve months later the Club finished runners-up, missing out on the title with some erratic form in the closing games. In 1986/87 and 1987/88 the Club lifted the Herts Charity Shield, making them only the sixth team to retain the Shield. The close of the 1986/87 season also saw floodlights installed at the Herns Lane ground. In 1988/89 the Club gained a top six league finish along with an appearance in two cup-finals, the League Challenge Trophy and the Herts Senior Centenary Trophy. However these were both lost in the space of five days. The 1990/91 season saw Ray Sullivan step down and so began a lean spell in which the Club tried several combinations, amongst those being Dave Lawrence, Jock Bruce, former player Pat Maslen and Ian Priest. During these years the closest the Club came to anything was another Herts Charity Shield final appearance, during Pat Maslen’s reign. However the trophy slipped through their fingers when losing out to Sawbridgeworth Town on penalties after a 2-2 draw. 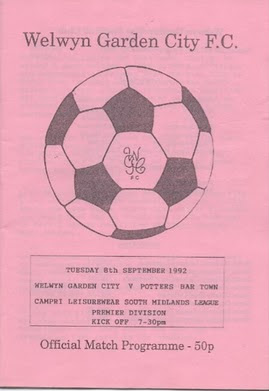