Corringham is a small English town within the unitary authority of Thurrock and one of the traditional (Church of England) parishes. It is situated in the east of the borough of Thurrock and has over time come to be considered an area within the larger neighbouring town of Stanford-Le-Hope. Corringham was formerly served by the Corringham Light Railway which connected the Kynoch munitions factory with the London, Tilbury and Southend Railway. It is one of the seven conservation areas within the Thurrock Unitary Authority.

East Thurrock United F.C was founded on 27 April 1969 by a group of fans who felt that the area around Corringham and Stanford-Le-Hope should have a senior non-league football club, following the successful Corringham Social Sunday League side, which had gained some local fame in the 1960s. The first league in which the club played was the Southern Essex Combination. They joined the Metropolitan–London League in 1972, and won Division Two at the first attempt. After the league merged with the Spartan League the club played in the London Spartan League until 1979, when they switched to the Essex Senior League. 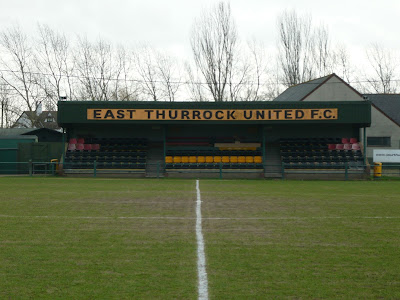 This Pieman travelled by train from London Fenchurch Street to Stanford-Le-Hope and from there caught a local bus to Corringham. It was possible to watch boats sailing up and down the Thames from Rookery Hill whilst the match was in progress. East Thurrock won convincingly 3-0 against Hertford Town in an entertaining Isthmian League match.