Edinburgh is the capital city of Scotland, situated in Lothian on the southern shore of the Firth of Forth. It is the second most populous city in Scotland and the seventh most populous in the United Kingdom. Edinburgh has been recognised as the capital of Scotland since at least the 15th century, but political power moved south to London after the Union of the Crowns in 1603 and the Union of Parliaments in 1707. The earliest known human habitation in the Edinburgh area is from Cramond where evidence was found of a Mesolithic camp-site dated to c. 8500 BC. Traces of later Bronze Age and Iron Age settlements have been found on Castle Rock, Arthur's Seat, Craiglockhart Hill and the Pentland Hills. By the time the Romans arrived in Lothian at the end of the 1st century AD, they discovered a Celtic Britonnic tribe whose name they recorded as the Votadini. At some point before the 7th century AD, the Gododdin, who were presumably descendants of the Votadini, built the hill fort of Din Eidyn or Etin. Although its exact location has not been identified, it seems more than likely they would have chosen a commanding position like the Castle Rock or Arthur's Seat or Calton Hill.

Meadowbank Thistle FC began life as Ferranti Amateurs in 1943. A works team of the Ferranti engineering company, they initially played in the Edinburgh FA's Amateur Second Division. In 1948 the club became known as Ferranti Thistle and began competing in the Edinburgh and District Welfare Association where they competed for five seasons, before moving to senior football in 1953 joining the East of Scotland League. During this period the club won the East of Scotland Qualifying Cup in 1963. In 1969 the club acquired City Park ground in Edinburgh. In 1972 the club became members of SFA which allowed them to enter the Scottish Qualifying Cup which they won in 1973 which previously had not been open to them. The clubs first match in the Scottish Cup was on 16 December 1972 against Duns. In 1974, as a result of the demise of Third Lanark seven years earlier, and the new three-tier format of the Scottish Football League a place opened up in the second division of the competition. After beating off competition from four Highland League sides, Hawick Royal Albert and Gateshead United, Ferranti Thistle were accepted into the league by a vote of 21–16 over Inverness Thistle. The club faced a number of obstacles before they could join the Division as their name did not meet stringent SFL rules on overt sponsorship of teams at the time and the City Ground was not up to standard. The local council offered use of Meadowbank Stadium a modern stadium built in 1970. After an Edinburgh Evening News campaign to find a name for the club, the name Meadowbank Thistle was chosen. This was approved by the SFL in time for the new season.

This Pieman travelled by train from London Kings Cross to Edinburgh Waverley. Prior to arrival the train passes the Meadowbank Stadium. A sign was spotted advertising a beer festival being held inside the stadium that day! Four pints of great ale (including some fine stuff from Orkney) I was able to trudge my way around to the other side of the stadium for the match. Visitors Hamilton Academical were convincing 4-0 winners. 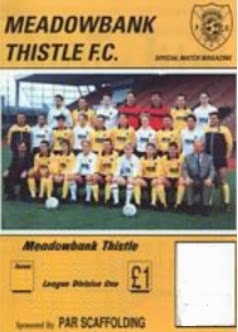