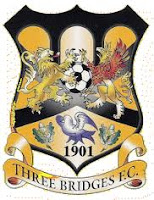 Three Bridges is a neighbourhood within the town of Crawley, in the county of West Sussex. Three Bridges was a tiny hamlet, which first began to grow with the coming of the London and Brighton Railway in 1841. Despite beliefs to the contrary, the village was not named after rail bridges, but three much older crossings over streams in the area (River Mole tributaries). The hamlet became the site of an important railway junction in 1848 with the opening of the branch line to Horsham and thence to Portsmouth. The railway established a motive power depot and marshalling yards to the south of the village. A further branch line to East Grinstead was opened in 1855. The village changed radically with the coming of the New town development in the Crawley area in the late 1940s. Three Bridges was one of the first group of neighbourhoods to be built. There are currently 13 neighbourhoods. Three Bridges continues to be the site of an important rail station at the intersection of the London to Brighton line and the London to Portsmouth Line, but the branch line to East Grinstead closed on 1 January 1967.

This Pieman travelled by train from London Victoria to Three Bridges station. From the station it takes a little over 5 minutes to walk to Jubilee Field. A close match on this Friday evening saw the home side defeat Burgess Hill Town in this Sussex County League, Division One encounter. 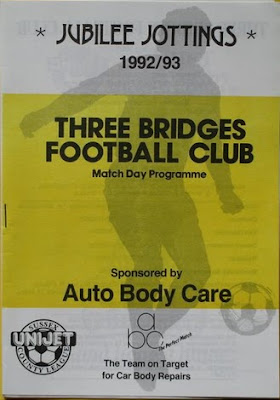