Newbury is a civil parish and the principal town in the west of the county of Berkshire in England. It is situated on the River Kennet and the Kennet and Avon Canal, and has a town centre containing many 17th century buildings. Newbury is best known for its racecourse and the adjoining former airbase at Greenham Common. Newbury was founded late in the eleventh century following the Norman invasion as a new borough, hence its name. Although there are references to the borough that predate the Doomsday Survey it is not mentioned by name in the survey. However, its existence within the manor of Ulvritone is evident from the massive rise in value of that manor at a time when most manors were worth less than in Saxon times. Historically, the town's economic foundation was the cloth trade. This is reflected in the person of the 16th century cloth magnate, Jack of Newbury, the proprietor of what may well have been the first factory in England, and the later tale of the Newbury Coat. The latter was the outcome of a bet as to whether a gentleman's suit could be produced by the end of the day from wool taken from a sheep's back at the beginning. 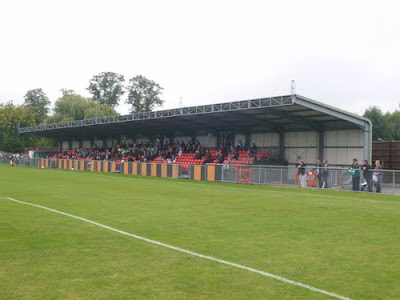 This Pieman travelled to Newbury by train from London Paddington. The station at Newbury is only five minutes walk from Farraday Road. The match, although keenly contested, failed to produce any goals and the points were shared between Berkshire and Essex. There was hardly anything to report from this experience other than that Peter Rhodes-Brown, former Chelsea and Oxford United player was in the Newbury Town team.