Southend-on-Sea is a seaside resort town and wider unitary authority area with borough status, in Essex, England, on the north side of the Thames estuary 40 miles east of central London. It is bordered to the north by Rochford and to the west by Castle Point. Southend-on-Sea is home to the world's longest pleasure pier, built in 1830 and stretching some 1.33 miles from shore. Since 1986, a diesel-hydraulic railway has run the length of the pier, replacing the electric service which opened in 1890. The pier was run through by a boat in 1984. Following a period of decline, Southend reinvented itself as the Home of the Access (credit card) due to it having one of the UK's first electronic telephone exchanges (it is still home to RBS Card Services – one of the former members of Access. Since then, much of the town centre has been developed for commerce and retail, and during the 1960s many original structures were lost to redevelopment – such as the Talza Arcade & Victoria Market (replaced by what is now known as The Victoria Shopping Centre) and Southend Technical College (on the site of the Odeon Cinema). However, about 6.4 million tourists still visit Southend per year, generating estimated revenues of £200 million a year. HM Customs & Excise are major employers in the town, and the central offices for the collection of VAT is located at Alexander House on Victoria Avenue. The University ossx, Southend Campus has been developed locally to provide higher education facilities and to assist in boosting the economy. Southend also has over 80 parks and green spaces and 14 conservation areas.


Southend Manor was formed in 1955 by Gil and Doris Medcalf as a team of 10 and 11-year-old boys. Gil Medcalf had played for Eton Manor both before and after the Second World War, and the inclusion of manor in the club name is a direct echoing of Gil's own career. The team was accepted into the lowest division of the Southend Youth League in 1959 and promptly finished last. Steady improvement was made in the Youth League and when the team became too old for youth football, in 1964, Southend Manor entered Division Five of the Southend Borough Combination. The rest of the 1960s saw a steady advance up the divisions with the Premier Division being reached in 1969. The 1970s and early 1980s saw a domination of the Borough Combination. In twelve seasons Southend Manor were league champions six times and runners up three times. The league's knock-out cup was won five times and they were once runners up. In particular, the 1978–79 season saw a closing run of 25 wins and one draw in the last 26 games which included the capture of the Essex Intermediate Cup. With both League and League Cup won, an exhausting season ended with the winning of the Southend Charity Competition. In the early 1980s entry was gained to the newly formed Southend & District Alliance and two titles were gained in the first three years. With such a good pedigree it must be wondered why Southend Manor were unable to progress to higher standards of football. The problem was that the club used council pitches that were only available for a limited part of the season. However, after many years of pressure Southend Manor was allowed to use Southchurch Park (originally sharing with Southend Athletic Club) which had many of the attributes needed for Senior Football. In 1985 the club gained access to the Essex Senior League Reserve Division, while carrying out the work needed to meet senior status requirements. This status was reached in 1988 with a new clubhouse being erected. In the second season the Essex Senior League Cup was won. In season 1990–91 the Essex Senior League title was won along with the Harry Fisher Memorial Cup, while the League Cup saw the club falter in the final. In 1991–92 the final of the Harry Fisher Memorial Cup was reached but the Club was narrowly defeated by a goal in the last minute of extra time. 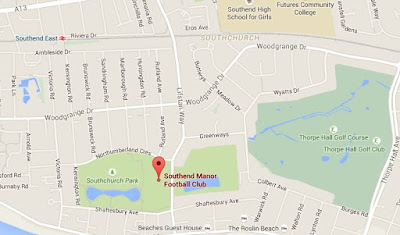 This Pieman made the journey to Southend by train from London Fenchurch Street to Southend East station. The walk to Southchurch Park from there taking a little over 5 minutes. My abiding memory of this day was hearing the sad news that England's World Cup winning captain Bobby Moore had passed away. Everyone present observed a minute silence before the match. The home side was in fine form defeating visitors Stansted FC 4-0 in this Essex Senior League fixture. 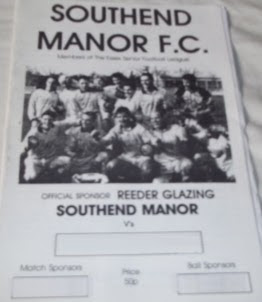