Thamesmead is a district of South East London, located in the London Boroughs of Greenwich and Bexley. It is situated 9.4 miles east of Charing Cross, and includes a group of disparate developments, mainly social housing, built from the mid-1960s onwards, mostly on former marshland on the south bank of the River Thames, between the established towns of Woolwich and Belvedere. Most of the land area of Thamesmead previously formed about 1,000 acres of the old Royal Arsenal site that extended over Plumstead Marshes and Erith Marshes. The river level was significantly lower, but rose after the Roman era and the area reverted to marshland. According to Hasted, some areas of this marshland were drained by 1279 by the monks of Lesnes Abbey. Between 1812 and 1816, a canal was built by convicts to take materials such as timber from the River Thames to Woolwich Royal Arsenal. Much of this canal has been filled in, but part remains in Thamesmead West and is now called the Broadwater. A disused lock gate and swing bridge over the canal still exist beside the River Thames. Much of Thamesmead was initially built by the Greater London Council (GLC) for rent to families moving from overcrowded back-to-back Victorian housing (also referred to as slums) in south eastern parts of Inner London. The area had been inundated in the North Sea Flood of 1953, so the original design placed living accommodation at first floor level or above, used overhead walkways and left the ground level of buildings as garage space. The first residence was occupied in 1968, but already there were rain penetration problems. The pre-1974 parts of Thamesmead are a mix of modernist town houses, medium-rise and 12-storey blocks system-built in concrete, which have featured in various films due to their 'rough urban look'; the design of the newer buildings is more traditional and in brick. 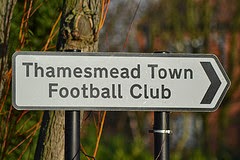 Thamesmead F.C. was formed in 1969 as a community team for local youngsters. The club merged with Southlake FC in 1973, and by 1979 were fielding a Saturday team, playing on park pitches at Crossways. In 1980 the club entered the London Spartan League at the Intermediate Division Three level. They dominated the intermediate divisions in the early 1980s, but were unable to gain promotion to the Senior Division until they gained senior status. At around this time, they played matches at the Meridian Sports Ground in Charlton. In 1985, the club changed its name to Thamesmead Town FC, and later that year they relocated to Bayliss Avenue. The club finally gained senior status during the summer of 1987 and were accepted into the London Spartan League Premier Division for the 1987–88 season. The club joined the Kent League in June 1990. 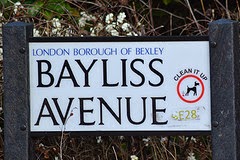 This Pieman visited Bayliss Avenue for a midweek Kent League match with Kent police. An entertaining match saw the home side triumph 4-2. My journey was by train from London Bridge to Abbey wood and then by bus direct to the ground. 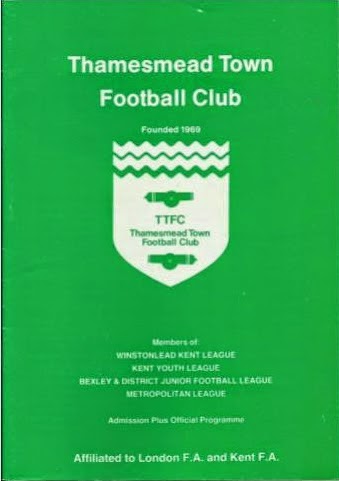