Willesden is an area in North West London, which forms part of the London Borough of Brent. It is situated 5 miles northwest of Charing Cross. It was historically a parish in the county of Middlesex that was incorporated as the Municipal Borough of Willesden in 1933 and has formed part of Greater London since 1965. The name derives from the Anglo-Saxon Willesdune, meaning the Hill of the Spring and a settlement bearing this name dates back to 939 AD. The Doomsday Book of 1086 records it as Wellesdone. However, on 19th century maps of the town such as those from the 'Ordnance Survey First Series', the town is shown as Wilsdon. The motto of Willesden Borough Council was Laborare est orare ("to labour is to pray"). The parish of Willesden remained predominantly rural up until 1875, when its population was 18,500. However, this changed with the opening of the Metropolitan Railway (later the Metropolitan line) station of Willesden Green on 24 November 1879. World War I caused Willesden to change from a predominantly middle class suburb to a working class part of London. After the war, Willesden grew rapidly as many factories opened up with numerous flats and houses. The local council encouraged building to prevent large unemployment and decline. To the present day, Willesden has been shaped by the patterns of migration, which marks it out as one of the most diverse areas in the United Kingdom. City of London Corporation records show that the first black person recorded in Brent was Sarah Eco, who was christened in St. Mary’s Church in Willesden on 15 September 1723. On the popular 1980s/90s TV show "Minder", Arthur Daley had a lock-up full of questionable merchandise located in Willesden.

The football club joined the Spartan League following a successful period in the Middlesex County League. The Club joined the Spartan League in 1991, winning the title at the first attempt. During this period, Barry Hayles played for the club before embarking on a professional career that saw him play for Fulham, Stevenage Borough, Leicester City and Sheffield United among others. 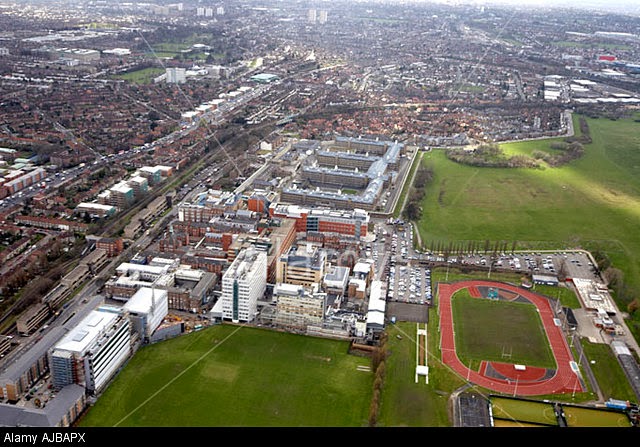 This Pieman visited the West London Stadium one evening after work. The journey was made using the Central Line alighting at White City (East Acton would have been an alternative). From the station a twenty-minute walk enabled me to reach this venue which is situated next to Wormwood Scrubs Prison. Like many municipal athletics venues, the West London Stadium is not blessed with much by way of spectator facilities. However, the covered seated stand is spacious. Visitors Beaconsfield United did a "smash and grab raid" on their hosts, winning this London Spartan League encounter by the only goal.

Admission: Free
Programme: None issued
Posted by Pieman at 11:59 pm