Dorchester is the county town of Dorset, England. A historic market town, Dorchester lies on the banks of the River Frome, in the Frome Valley, just south of the Dorset Downs and north of the South Dorset Ridgeway, that separates the area from Weymouth, 8 miles (13 km) south. Dorchester is noted as being home and inspiration to the author Thomas Hardy, whose novel The Mayor of Casterbridge was based on the town. Dorchester's roots stem back to prehistoric times. Settlements were first based around Maiden Castle, a large Iron Age hill fort that was one of the most powerful settlements in pre-Roman Britain, with varying tribes having existed there since 4000 BC. The Durotriges were likely to have been there at the arrival of the Romans in 43 AD. The Romans defeated the local tribes by 70 AD and walled the town; the remains can still be seen today. The walls were largely replaced with walks that form a square inside modern Dorchester. Known as 'The Walks' a small segment of the original Roman wall still exists today near the Top 'o Town roundabout.


Founded in 1880, Dorchester Town were Dorset Senior Cup finalists in 1888 and 1890 before joining the Dorset League in 1896. Despite being founder members of the league, the club had little success before winning the championship in 1937/38 with a 2–0 victory at Sherborne on 25 April 1938. The club joined the Western League in 1947, winning promotion from Division Two in 1950, and going on to take the league championship in 1954/55. The fifties proved to be a successful decade for the Magpies, winning the Dorset Senior Cup for the first time, and having a number of good runs in the FA Cup facing the likes of Norwich City, Queens Park Rangers, Port Vale and Plymouth Argyle. In 1954, Dorchester reached the 2nd Round before eventually losing out to York City in front of 5,500 fans at the old Avenue ground, in a season where York went on to reach the semi-finals. championship in 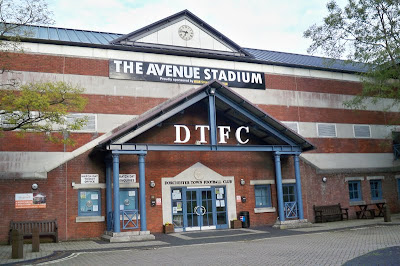 Located to the south of Dorchester on Weymouth Avenue (where the club have been based since their inception), the Avenue Stadium was opened in 1990, having cost £3,000,000 to build. The stadium was designed and is owned by the Duchy of Cornwall. As such the Duke of Cornwall paid two official visits to the ground, plus a number of unofficial ones prior to the inaugural match on 18 August 1990. The whole ground was built by McIntyre Construction at a cost of around £3 million, of which £110,000 was spent on the playing surface. 32,000 tons of chalk was laid to ensure the good drainage of a pitch that was prepared fully 18 months before completion of the stadium. The chalk lies 1 metre deep at one end, and 3 metres deep at the other, to ensure a level surface. The Stadium consists of one all-seated main stand, built to reflect the architecture of traditional English stadia, and three small banks of terracing, surrounding the pitch.

This Pieman travelled to Dorchester by train from London Waterloo. Dorchester is a very pleasant town to visit but unfortunately it rained constantly on this particular April Saturday. However, a splendid pub lunch and some quality ale more than made up for the weather. Visitors Cambridge City were delayed by traffic congestion on their way to Dorchester and as a result the match kicked off almost an hour late. The journey will not have helped Cambridge City, as they were comprehensively beaten 5-0. 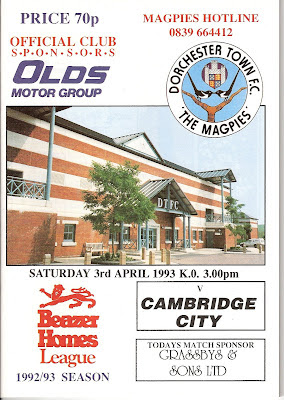