Darenth is a village and civil parish in the Dartford District of Kent, England. The parish is located to the south-east of Dartford town; the village is three miles (4.8 km) from there. The parish was part of Axstane Hundred and later Dartford Rural District. The Darenth viaduct runs east-west across the Darenth Valley and carries two railway tracks on the line from London (Victoria) to Dover. It consists of 10 arches, each approximately 10 metres wide by 20 metres high above water level. The 3rd and 6th arches span the Horton Road and river Darent respectively.  In the early 20th Century, the Darent powered numerous mills, one of which – Horton Kirby Paper Mill owned a sports ground comprising of football and cricket grounds with pavilions, hard and grass tennis courts and a bowling green.  In 1968 the Paper Mills’ sports club folded and local man Brian Smith bought the sports ground from the Mill.  He turned the tennis courts into a car park and let the football ground (known as Horton Road) to Darenth Heathside FC, who have played there ever since.


This Pieman ventured to Horton Road one evening after work. The journey by train from London was to Farningham Road Station. The walk from the station to the ground took less than five minutes. At the end of the road was the Sun public house where liquid refreshment was purchased. The following photograph shows the superb viaduct that provided an excellent backdrop to the ground at Horton Road. Unfortunately I do not have any pictures of the ground. Visitors Thamesmead Town won an entertaining end of season encounter by three goals to one. 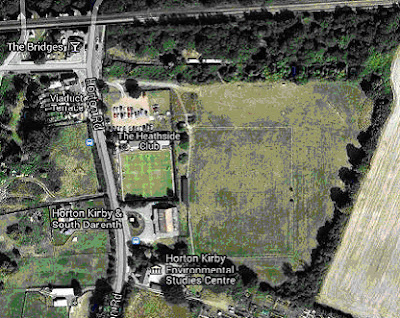 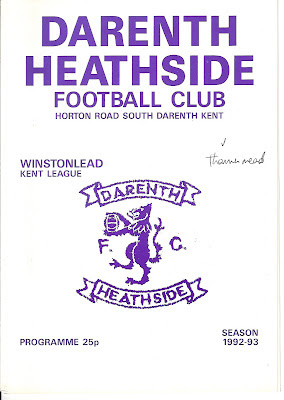