Leverstock Green is a suburb in Hemel Hempstead, in Hertfordshire. It is located on the eastern edge of the town. It is a "modern" parish, formed about 1849 from parts of the parishes of St Michael's (St Albans), Abbots Langley and Hemel Hempstead. There is documentary and archaeological evidence that people lived and worked in the immediate area of Leverstock Green from the time of the Roman occupation onwards. Recent research indicates that settlement along Westwick Row may well date back even further to the Iron Age and perhaps the Bronze Age. It seems quite likely that this settlement was a "suburb" of the major Iron Age settlement at Pre Wood just outside St. Albans.

Leverstock Green Football Club was formed around 1895 and played their first competitive matches during season 1908/1909 when the Club competed in Division Three of the West Herts League. The Club’s ground in Pancake Lane originally formed part of the Gorhambury Estate, Lord Verulam making the ground available for the youth of the area and his estate workers to enjoy a game of ball. He also provided timber-built changing rooms, which have been progressively replaced since the 1960s by the existing brick built clubhouse and changing rooms. When Lord Verulam died, certain parcels of land, including that on which the Football Club stood, fell to the Crown in lieu of death duties and is administered on its behalf by the Commission for New Towns, who have remained the Clubs landlords since that time, despite two unsuccessful attempts by the Club to buy the freehold. The club remained members of the West Herts League until 1954 when it successfully applied to join the Herts County League. By the mid 1970s the Club started to move forward with a new clubhouse, post & rail and the installation of training lights. In 1979 the club won Division One of the Herts County League and were promoted to the Premier Division - the highest standard the Club had achieved in 80 years. In 1991 the Club were accepted into the South Midlands League.

This Pieman travelled to Hemel Hempstead by train (although Apsley station is slightly nearer to Pancake Lane). The walk from the station took around 30 minutes. Visitors Letchworth Garden City FC took the points in this South Midlands League encounter with a comprehensive seven goal victory. 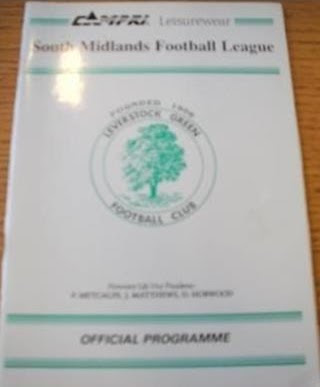