Frimley Green is a large suburban village in Surrey, South East England, close to the border with Hampshire. It is close to the towns of Camberley and Frimley, with the nearest major town being Guildford, approximately 10 miles away. Frimley Green, as with many English villages, is named after the central village green. It is fairly large in size, and has remained unchanged for many years. Frimley Lodge Park is located between Frimley Green and Mytchett. The Basingstoke Canal runs alongside the park. It contains several large playing fields, a wooded area with an activity trail and unusually, a miniature railway. The nearest railway stations are Frimley, Ash Vale, Farnborough North and Farnborough (Main) (the South Western Main Line from Southampton to London Waterloo runs through part of the village). 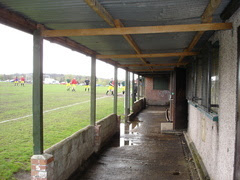 Frimley Green Football Club was established in 1919. In 1981, they joined the Combined Counties League West Division. The present clubhouse was erected in 1972 when 'The Green' competed in the Spartan League and used a pitch on the lower part of the park with the changing rooms standing where the car park is now. A few years later a new pitch was laid adjacent to the clubhouse and changing rooms added to the clubhouse building.

This Pieman visited the Recreation Ground for an early season midweek evening match. A comprehensive performance from visitors Peppard saw them run out 5-0 winners. No admission was charged and no programme was issued for this match.