Hyde is a town in the Metropolitan Borough of Tameside, Greater Manchester, England. Historically in Cheshire, it is 5 miles north-east of Stockport, 6.3 miles west of Glossop and 7.0 miles east of Manchester. Its name is derived from the Hide, a measure of land for taxation purposes, taken to be that area of land necessary to support a peasant family. In later times it was taken to be equivalent to 120 acres. In the late 18th century the area that was to become the town centre was no more than a cluster houses known as Red Pump Street. Gee Cross was much larger and 'Hyde' was still only used to refer to the estates of Hyde Hall on the banks of the River Tame. Altogether there were only 3,500 inhabitants in the district in 1801. The population of Hyde increased due to the success of the cotton mills during the Industrial Revolution of the late 18th and early 19th centuries, at one stage there were 40 working mills. By 1872 only 27 remained, half of the remaining mills closed between 1921 and 1939 and there is only one working mill in the town today. During the 1960s, Myra Hindley and Ian Brady were arrested in their home on the Hattersley estate in Hyde after police found the body of 17-year-old Edward Evans in the house. At their trial they were found guilty of murdering Evans as well as two other children whose bodies were found buried on Saddleworth Moor several miles away. 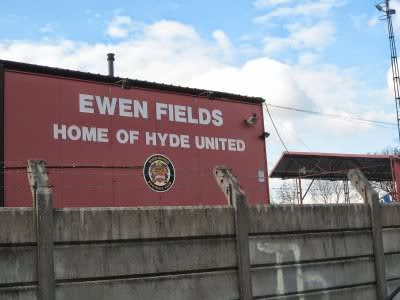 Hyde United Football Club was formed in 1919. After one season in the Lancashire and Cheshire Federation, Hyde joined the Manchester League and by 1930 had won it five times and won the Gilgryst Cup twice. During the 1920s, the teams’ players wore black-and-white halved shirts for a spell. The club moved into the Cheshire County League in 1930 and won the League Challenge Cup four years later. The decade after the Second World War proved to be a purple patch for the club. In 1946 they won the Cheshire Senior Cup, the first of many trophies to arrive at Ewen Fields during the next ten years. In 1953 Hyde won the League Cup followed by a league and cup double a season later. The 1955–56 season saw the club retain the championship and finish as runners-up in the following three seasons. They reached the FA Cup first round in 1954 only to lose 5–1 away to Workington, who were at that time managed by Bill Shankly. Hyde were founder members of the Northern Premier League in 1968 but could not afford the cost of travel to places like Ashington and Scarborough and rejoined the Cheshire League in 1970 where they remained for 12 years. They won the League Cup in 1973, and in 1981 finished as runners-up in the league and winners of the Cheshire Senior Cup and The League Challenge Shield. A year later, with Les Sutton as manager, Hyde swept the Cheshire League Board, and with the installation of a number of supporter's club-financed ground improvements, won election to the Northern Premier League. The first year back saw the club score 91 goals and reach the first round of the FA Cup where they lost 2–0 at Burnley. A year later, with Peter Wragg as manager, Hyde reached the Northern Premier League Cup final— only to lose on penalties to South Liverpool. However, they were back in the final in 1986 when they beat Marine 1–0. 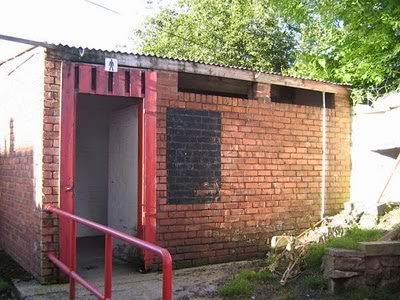 This Pieman was working in Manchester and took full advantage by watching a couple of football matches in an area that had so far been off his radar. The journey from Manchester Piccadilly was to Newton for Hyde station. On arrival at Ewen Fields, I was uncertain that the match would go ahead. However the artificial pitch drained very quickly and I was able to watch a rampant Marine side take the points following a 3-1 victory over their hosts. 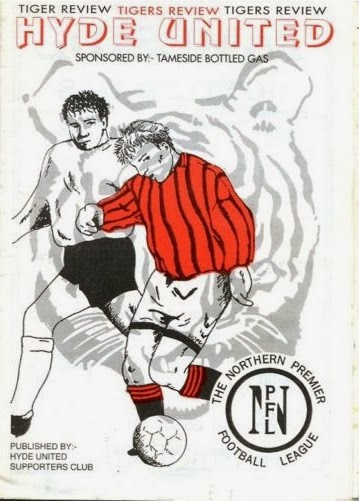