Rotherfield Peppard (often referred to simply as Peppard by locals) is a village and civil parish in the Chiltern Hills in South Oxfordshire. It is just over 3 miles west of Henley-on-Thames, about 5 miles north of Reading, Berkshire and just over 1 mile west of the village of Rotherfield Greys. Rotherfield derives from the Old English redrefeld meaning "cattle lands". Within the parish is the open land of Peppard Common, once used for grazing and small timber. The village has thrice been used for settings in the television drama series Midsomer Murders and also for many of the scenes (including the eponymous house) in the Merchant Ivory Productions film Howards End.


This Pieman visited Palmer Park having caught the train from London Paddington to Reading. It took around twenty minutes to walk to the stadium which is an athletics venue and velodrome. Fleet Town gave a good account of themselves in this match but were eventually defeated 5-2 by in form Peppard. 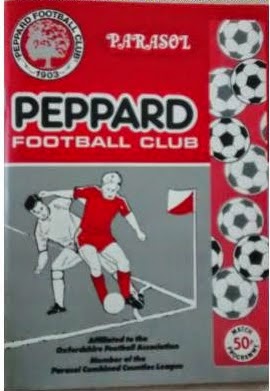