Stalybridge is a town in Tameside, Greater Manchester, England. Historically a part of Cheshire, it is 8 miles east of Manchester city centre and 6 miles north-west of Glossop. The earliest evidence of human activity in Stalybridge is a flint scraper from the late Neolithic/early Bronze Age. Also bearing testament to the presence of man in prehistory are the Stalybridge cairns. The two monuments are on the summit of Hollingworthall Moor, 153 yards  apart. One of the round cairns is the best-preserved Bronze Age monument in Tameside and is protected as a Scheduled Ancient Monument. A branch of the Roman road between the forts at Manchester (Mamucium) and Melandra Castle (Ardotalia) is thought to run through Stalybridge to the fort of Castleshaw. With the construction of a cotton mill in 1776, Stalybridge became one of the first centres of textile manufacture during the Industrial Revolution. The wealth created in the 19th century from the factory-based cotton industry transformed an area of scattered farms and homesteads into a self-confident town. Due to the decline of the cotton industry in the first quarter of the 20th century and the development of modern low-density housing in the post-war period, the town is now semi-rural in character. 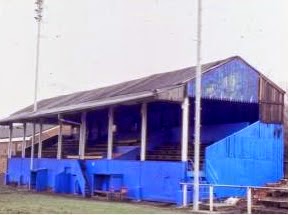 Stalybridge Celtic FC's formation is usually given as 1909. However, it may have been as early as 1906 when an amateur club with the same name was formed. There were players called Storrs and Manwood who played in the 1906 and 1909 teams, and a player called Rhodes who played in the amateur's first game; a Herbert Rhodes was a significant benefactor of the 'later' Celtic. In an attempt to progress the club joined the Southern League. The club rejoined the Central League for the 1919–20 season and in 1921 became one of the founder members of the Football League's Third Division North. However the club resigned after two seasons, as it was felt that it could not attract enough support to justify a League side - in spite of the fact that average attendance of 5,480 in 1922 was almost 2,000 more than neighbouring Rochdale, who played in the same Division. They joined the Cheshire County League remaining members for 60 years and winning the title only once in 1980. With the league's merger with the Lancashire Combination in 1982, they became founder members of the North West Counties League, winning the title in 1984 and 1987, with the latter triumph resulting in them being promoted to the Northern Premier League (NPL). In 1992 the club won the league title and was promoted to the Football Conference. The team plays its home matches at Bower Fold.

This Pieman was working in Manchester which provided the ideal opportunity to visit Bower Fold. Taking advantage of the frequent train service from Manchester, a further 20 minute walk enable me to reach the ground on Mottram Road. An entertaining match saw honours even with a 1-1 draw against Halifax Town. 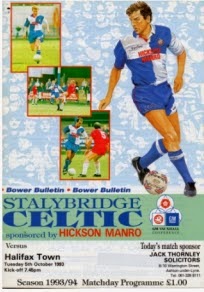