Millwall is an area in London, on the western side of the Isle of Dogs, in the London Borough of Tower Hamlets. It lies to the south of the developments at West India Docks, including Canary Wharf. Originally known as Marshwall, its name derives from the large number of windmills built on the river wall, in the 19th century. Corn was brought along the River Thames to be ground into flour here, before being delivered to bakers who kneaded the dough. Millwall is arguably most famous for its football club. Millwall F.C., founded in 1885 as "Millwall Rovers" and nicknamed "The Dockers", (changed to "The Lions" in 1900) moved south of the river to New Cross in 1910, after occupying no fewer than four separate grounds in the 25 years since its formation.


I had already visited Millwall’s former home ‘The Den’ on a few occasions and this time was invited by a colleague to join him at the New Den. An easy five-minute or so train journey from London Bridge to South Bermondsey enabled us to reach this venue. The old place was quite an intimidating ground to visit for players and supporters and although the modern feel of the present ground has improved the feel of the place, the fans still cling to their 'no one like us' attitude. As for the match, Millwall were comfortable winners over Notts County. For me the home side’s Pat Van Den Hawe was man of the match with a very professional controlled performance. At Spurs towards the end of his time there, I thought he was struggling but his class certainly shone through at the lower level. 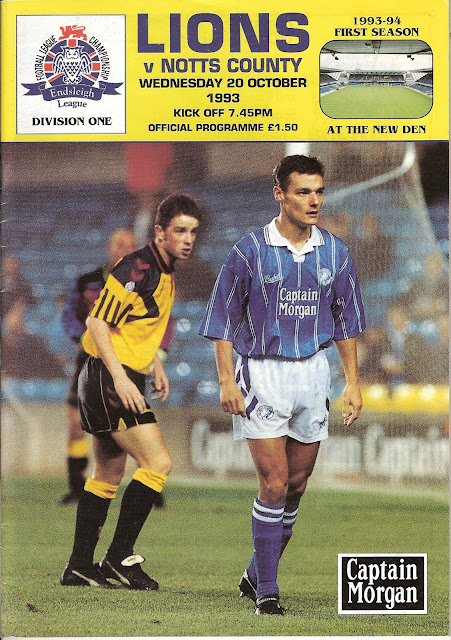 Subsequent visits to the New Den