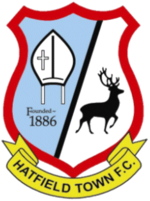 Hatfield is a town and civil parish in Hertfordshire, England, in the borough of Welwyn Hatfield. In the Saxon period Hatfield was known as Hetfelle, but by the year 970, when King Edgar gave 5,000 acres (20 km2) to the monastery of Ely, it had become known as Haethfeld. Hatfield is mentioned in the Doomsday Book as the property of the Abbey of Ely. In 1226, Henry III granted the Bishops of Ely rights to an annual four-day fair and a weekly market. The town was then called Bishop's Hatfield. Hatfield House is the seat of the Cecil family, the Marquesses of Salisbury. Elizabeth Tudor was confined there for three years in what is now known as "The Old Palace" in Hatfield Park. Legend has it that it was here in 1558, while sitting under an oak tree in the Park, that she learned that she had become Queen following the death of her half-sister, Queen Mary I. She held her first Council in the Great Hall (The Old Palace) of Hatfield. In 1851, the route of the Great North Road (now the A1000) was altered to avoid cutting through the grounds of Hatfield House. In 1930 the de Havilland airfield and aircraft factory was opened at Hatfield and by 1949 it had become the largest employer in the town, with almost 4,000 staff. It was taken over by Hawker Siddeley in 1960 and merged into British Aerospace in 1978. In the 1930s it produced a range of small biplanes. During the Second World War it produced the Mosquito fighter bomber and developed the Vampire, the second British production jet aircraft after the Gloster Meteor. British Aerospace closed the Hatfield site in 1993 having moved the BAe 146 production line to Woodford Aerodrome. After the Second World War, Hatfield was designated a New Town under the New Towns Act 1946 (and the earlier Abercrombie Plan for London in 1944), forming part of the initial Hertfordshire group with nearby Stevenage, Welwyn Garden City and Letchworth.

Hatfield Football Club was founded in 1886 by members of Hatfield Cricket Club and played their matches in Lord Salisbury's Hatfield Park. In the 1906/07 season Hatfield FC merged with Dagmar House School Old Boys to form Hatfield United FC. The merger was driven by there being only one pitch available, namely Showfield, later known as Stonecross Road, as the other was taken up by the extension of the town cemetery. The club began their league campaigns in the Mid Herts League in the 1890s and then moved to the Herts County League. In the 1920s there was another merger, this time with Hatfield Cricket and Athletic Clubs to form Hatfield United Athletic Club. Moving up to the senior amateur Spartan League, their first season was cut short by the outbreak of war and they managed to complete only one fixture. The club reformed after the war and three years later the merger with the cricket section was undone with the cricketers returning to Hatfield Park and the football section continuing to compete in the Spartan League as Hatfield Town FC. After several seasons they were not re-elected and moved to the Parthenon and London League before entering the Metropolitan League in the mid 1960s. In the late 1970s when, once again, finances were inadequate the limited company was wound up in the High Court. The football club continued to play at Stonecross Road until 1980 when the land was sold for housing, forcing a move to Angerland Common until 1984 when the club folded due to lack of finances and a committee to run the club. Reforming in 1989 Hatfield Town played on the council run Roe Hill Playing Fields pitch and entered the Herts Senior County League where they won three divisional championships in successive seasons. Promotion to the South Midlands League prompted a move to Gosling Sports Park in neighbouring Welwyn Garden City.


This Pieman visit the Gosling Stadium, having travelled by train from London Kings Cross to Welwyn Garden City. The walk from the station taking around ten minutes. On this occasion visitors Potters Bar Town were comprehensively beaten by three clear goals.

Subsequent visit to the Gosling Stadium