Farnham is a town in Surrey, within the Borough of Waverley. The town is situated some 42 miles southwest of London in the extreme west of Surrey, adjacent to the border with Hampshire. It is of historic interest, with many old buildings, including a number of Georgian houses. Farnham Castle overlooks the town. A short distance southeast of the town centre are the ruins of Waverley Abbey, Moor Park House and Mother Ludlam's Cave. Farnham is twinned with Andernach in Germany. Farnham's history has been claimed to extend back tens of thousands of years to hunters of the Paleolithic or early Stone Age, on the basis of tools and prehistoric animal bones found together in deep gravel pits. The first known settlement in the area was in the Mesolithic period, some 7,000 years ago; a cluster of pit dwellings and evidence of a flint-knapping industry from that period has been excavated a short distance to the east of the town. Neolithic man left evidence of occupation in the form of a long barrow at nearby Badshot Lea, now destroyed by quarrying. This monument lay on the route of the prehistoric track way known as the Harrow Way or Harroway, which passes through Farnham Park, and a sarsen stone still stands nearby, which is believed to have marked the safe crossing point of a marshy area near the present Shepherd and Flock roundabout. The parallel Pilgrims' Way, known as such for linking Canterbury to Winchester, also dates back to prehistory and, like the Harrow Way, may date back to the time when Britain was physically joined to continental Europe. 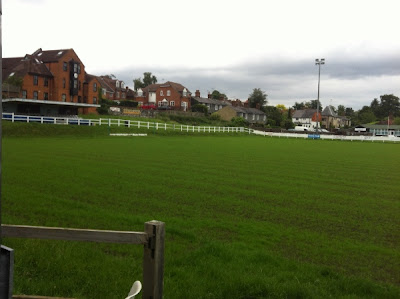 Farnham Town Football Club was established in 1906 through the merging of Farnham Bungs (the Farnham Brewery) and the Farnham Star. The club was one of the founder members of the London Spartan League in 1975. They reached the Fourth Round of the FA Vase in the 1976-77 season. At the end of the 1979/80 season Farnham Town left the London Spartan League and applied to the Combined Counties League, their application was accepted and they finished 4th in their first season. The 1986/87 season saw Farnham take second place to Ash United in the league campaign. The glory days finally arrived in the 1990/91 season when the club won the league title. In the 1991/92 season, the Town got a clean sweep of the major trophies by winning the Combined Counties Premier League, the Dan Air Elite Cup and the Dan Air Challenge Cup. Having won the league, the club applied and were accepted to the Diadora League; however funds for necessary ground improvements could not be generated which resulted in the club not having a league to play in for the 1992/93 season. In 1993/94 Farnham Town were accepted back into the Combined Counties League where they continue to ply their trade. 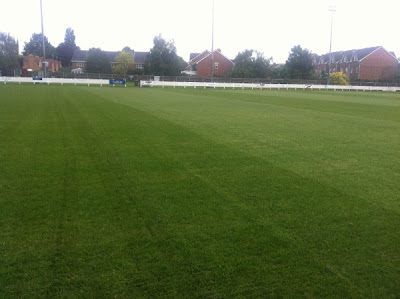 This Pieman was able to visit the Memorial Ground on an early May Saturday afternoon. The journey was made by train from London Waterloo and it took a further 15 minutes to walk to the ground from Farnham station. Visitors Ashford Town (Middlesex) took the points with a 2-0 victory. 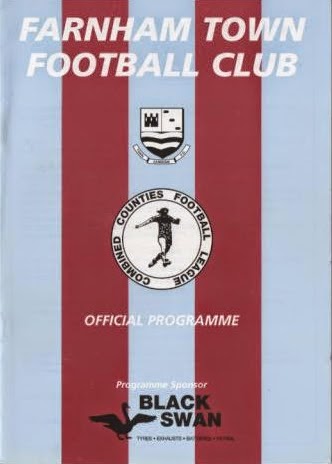