Eton Wick is a village in  Berkshire on the western outskirts of London, immediately north of the River Thames. It is located very close to both the historic towns of Windsor and Eton, as well as Slough. The village has grown rapidly between since 1889. The village is part of the Royal Borough of Windsor and Maidenhead and administered by an elected Unitary Authority. Before 1974, the village was in Buckinghamshire, but was moved to Berkshire in the local government reorganisation of that year. 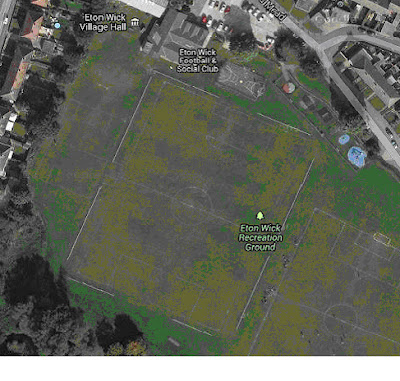 Eton Wick FC was formed in 1881, originally played at Dorney Common, moving to their present ground in 1904. The club at the end of the 1952–53 season were promoted to the Windsor, Slough and District League First Division, and became winners of the Slough Premier Cup. The 1954–55 season saw the club in the premier division and they went on to stay in that division for 37 Seasons, winning the league in the 1974–75 and 1986–87 seasons. In 1991 they joined the Chiltonian League Division One and reached the 2nd round of the FA Vase in the 1994–95 season. Two seasons later the club then joined the Combined Counties league.


This Pieman travelled to Haywards Mead by train from London Waterloo to Windsor & Eton Riverside. From the station it was about a half-hour walk to Eton Wick. There are limited refreshment opportunities in the ground but there is a public house just across the road. This end of season encounter saw the hosts share four goals with visitors Peppard. 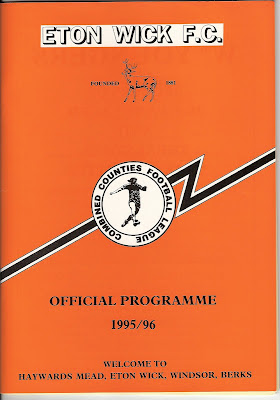