Eastleigh is in Hampshire, England, and the main town in the Borough of Eastleigh. The town lies between Southampton and Winchester, and is part of the South Hampshire conurbation. The modern town of Eastleigh lies on the old Roman road, built in A.D.79 between Winchester (Venta Belgarum) and Bitterne (Clausentum). Roman remains discovered in the Eastleigh area, including a Roman lead coffin excavated in 1908, indicate that a settlement probably existed here in Roman times. A Saxon village called ‘East Leah’ has been recorded to have existed since 932 AD. (‘Leah’ is an ancient Anglo-Saxon word meaning ‘a clearing in a forest’). There is additional evidence of this settlement in a survey from the time which details land in North Stoneham being granted by King Æthelstan to his military aid, Alfred in 932 AD. The prefix 'Est' or 'East' is thought to refer to its location relative to the established settlement of Baddesley. The Doomsday Book of 1086 gives a more detailed account of the settlement, which is referred to as 'Estleie'. In 1838 the London and South Western Railway Company (L&SWR) built a railway from Southampton to Winchester. It was decided to build a station near the little village of Barton. This railway station was originally named Bishopstoke Junction. In 1868 the villages of Barton and Eastley were combined into one parish. A parish church, the Church of the Resurrection, was built in the same year, at a cost of £2,300. A local noted author of many novels, Charlotte Yonge, donated £500 towards the building of the church. She was rewarded by being given the privilege to choose a name for the 'new' parish; either Barton or Eastly. She chose Eastly, but with a new modern spelling; Eastleigh. In 1891 the L&SWR Carriage and Wagon Works from Nine Elms in London were transferred to Eastleigh. This was followed by the Nine Elms Locomotive Works which were moved there in 1909. The United States Navy established a naval air station on 23 July 1918 to assemble and repair Caproni Ca.5 and Airco DH.4 and DH.9 bombers for the Northern Bombing Group of World War I. The base closed shortly after the First Armistice at Compiègne. Perhaps Eastleigh's best-known 'resident' is the Spitfire aeroplane which was built in Southampton and first flown from Eastleigh Aerodrome (now Southampton International Airport).


The club was formed on 20 May 1946 by Derik Brookes and a group of friends in the Fleming Arms public house and originally known as Swaythling Athletic, which then changed to Swaythling. In 1950 they joined Hampshire League, and in 1980 were renamed Eastleigh. Eastleigh FC moved to Ten Acres in 1957 from their previous ground Walnut Avenue and in 1976 floodlights were added. Eastleigh were consistently one of the stronger teams in the top tier of the Hampshire League, Division One, in the early 1980s and they achieved their highest final position of 4th three times: in 1982, 1984 and 1985. Their first match in the F.A.Cup was a 2–1 success against Southern League side Poole Town in 1981. They went on to beat Melksham Town in the next round before succumbing 2–4 to another Southern League side, Dorchester Town. In 1986 they were accepted as one of the founding members of the Wessex League but never managed to finish above half way in the table until 1995–96 when a 4th-place finish was achieved. 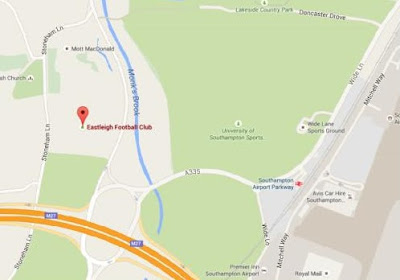 This Pieman travelled by train from London Waterloo to Southampton Airport Station. From here it was around a 15 minute walk to Ten Acres. A reasonably entertaining pre-season friendly match resulted in a goalless draw with Bedworth United FC.