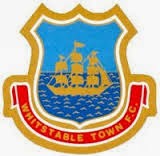 Whitstable is a seaside town located on the north coast of Kent. It is approximately 5 miles north of Canterbury and approximately 2 miles west of the seaside town of Herne Bay. Archaeological finds indicate that the Whitstable area was inhabited during the Palaeolithic era, the Bronze Age and the Iron Age. The remains of a Roman building have been found in the centre of the town. Charters indicate that there were Saxon settlements where salt production and coastal trade occurred. Whitstable is famous for its oysters, which have been collected in the area since at least Roman times. The town itself dates back to before the writing of the Doomsday Book. Whitstable's distinctive character is popular with tourists, and its maritime heritage is celebrated with the annual oyster festival. Freshly caught shellfish are available throughout the year at several seafood restaurants and pubs in the town. In 1830 one of the earliest passenger railway services was opened by the Canterbury and Whitstable Railway Company, and in 1832 the company opened Whitstable harbour and extended the line to enable passage to London from the port. The railway has since closed but the harbour still plays an important role in the town's economy.

Although the first recorded football match in Whitstable was in 1885, the first record of Whitstable Town's existence was the following year. After a couple of years playing in a field behind the railway station, the club relocated to The Belmont Ground in 1888, where they play to this day. In 1909 the Oystermen joined the original Kent League, where they played until it folded in 1959, winning the Division Two title three times. They also lifted the Kent Amateur Cup (now Kent Senior Trophy) in 1929. After the collapse of the Kent League, the club played for a while in the Aetolian League, but this meant long trips to play London teams as opposed to the earlier money-spinning East Kent derbies, and this was a period of financial struggle for the club, which dropped into the amateur leagues for a number of years. In the late 1960s the Kent League reformed, with the Oystermen among the founder members. 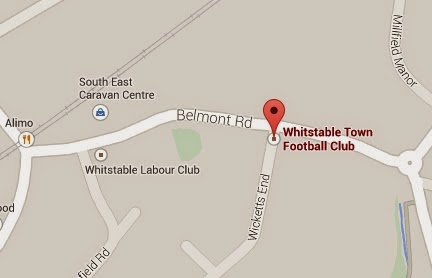 This Pieman visited Whitstable by train on this August Bank Holiday Monday. The journey was made by train from London Victoria to Whitstable. From the station it takes only a couple of minutes to walk to the ground. The opportunity was taken beforehand to explore this fine old town including the oyster sheds. The home side was in fine form for this match, beating visitors Faversham Town 5-1. 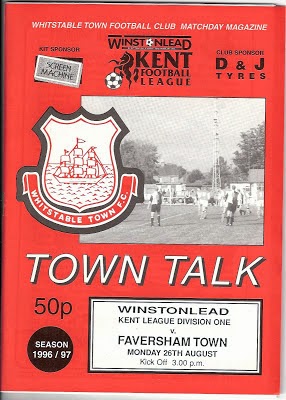