The first mention of Hastings is found in the late 8th century in the form Hastingas. This is derived from the Old English tribal name Hæstingas, meaning `the constituency/followers of Hæsta'. The place name Hæstingaceaster is found in the Anglo-Saxon Chronicle entry for 1050 and may be an alternative name for Hastings. However, the absence of any archaeological remains of or documentary evidence for a Roman fort at Hastings suggest that Hæstingaceaster may refer to a different settlement, most likely that based on the Roman remains at Pevensey. Evidence of prehistoric settlements have been found at the town site: flint arrowheads and Bronze Age artefacts have been found; Iron Age forts have been excavated on both the East and West Hills. This suggests that the inhabitants moved early to the safety of the valley in between the forts. The settlement was already based on the port when the Romans arrived in Britain for the first time in 55 BC. At this time, they began to exploit the iron (Wealden rocks provide a plentiful supply of the ore), and shipped it out by boat. Iron was worked locally at Beauport Park, to the north of the town, which employed up to one thousand men and is considered to have been the third largest mine in the Roman Empire. With the departure of the Romans, the town suffered setbacks. The Beauport site had been abandoned; and natural and man-made attacks began. The Sussex coast has always suffered from occasional violent storms; with the additional hazard of longshore drift (the eastward movement of shingle along the coast); the coastline has been frequently changing. The original Roman port could now well be under the sea. 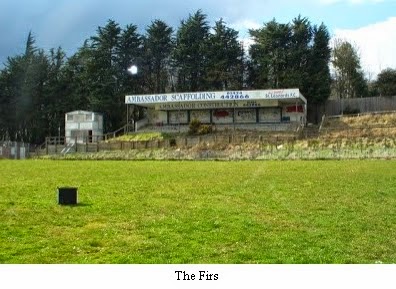 The football club was founded as a works team in 1971 by employees from the Sussex Turnery and Moulding Company started playing friendlies, under the company name of STAMCO. They were admitted into Division 5 (East) of the Eastbourne & Hastings Football League for the 1971–72 season and had progressed to Intermediate status in 1976 and had reached the Premier Division the following year. For the 1982–83 season STAMCO joined the Southern Counties Combination, winning Division Two in their first season. Within the next three seasons the club had won two Premier Division Championships and was promoted into Division Three of the Sussex County League in 1988. They gained senior status after earning promotion into Division Two by finishing runners-up in the League and Cup. In the 1992–93 season they won promotion into Division One as runners-up after missing out on the Championship on the final day of the season. Their first season in Division One saw them finish in 9th place and reach the semi-finals of the Sussex Senior Cup, the next two seasons they finished Runners-up to Peacehaven & Telscombe and they won promotion to the Southern League for the 1996–97 season. However before they were accepted into the Southern League, the league required that the club, who were by now playing at The Firs, changed their name to reflect the club's geographical location. The club's two main sponsors, STAMCO and Croft Glass, were fused into the new name; the result was St. Leonards Stamcroft. 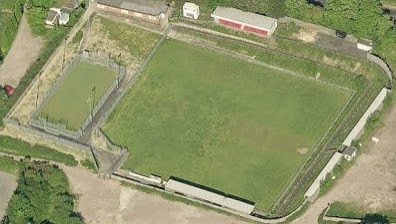 This Pieman travelled from London Bridge to Hastings station. After a very nice lunch at the Seagull restaurant on the seafront, I walked to The Firs to watch the home side defeat Metropolitan Police 2-0 in the FA Cup, Preliminary Round. 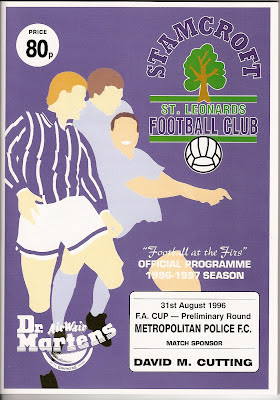 In 1998 St Leonards Stamcroft FC changed their name to St Leonards FC. In January 2004 the club resigned from the Sussex County League and their record for that season was expunged, a full Senior History is available courtesy of the Football Club History Database
Posted by Pieman at 11:59 pm