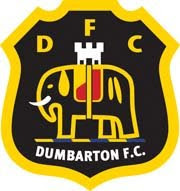 The town; dominated by Dumbarton Castle locally known as The Rock, was the capital of the Kingdom of Strathclyde in the 8th and 9th centuries, and became a Royal Burgh in 1222. For the next 600 years, much of the history of the town is reflected in the history of Dumbarton Castle. Once described by King Henry Vlll of England as the key to the realm, the Castle saw the departure for France of the six-year old Mary, Queen of Scots. The Castle officially remains a Scottish Royal Fortress along with Edinburgh and Stirling, and the reigning monarch, on his or her coronation, comes to the Castle for the ceremony of handing over the keys.


In 1872 a group of young men from Dumbarton resolved to form a football club after watching a match between Queen's Park and neighbouring Vale of Leven. At the period of their formation there were a number of other clubs playing in the town of Dumbarton and surrounding areas, but they have survived as the sole 'senior' club in the area.

I ventured north of the border, courtesy of Ryanair from Stansted via Prestwick. The Pieman was well into anorak mode at the time, having a desire to visit Dumbarton's Boghead Park. When challenged on this he would always claim that it was the name that was pulling him there. Having checked into my lodgings in Glasgow's West End, I made the relatively short journey to Dumbarton East station by train. However, this routine league fixture against Clyde suddenly took on a greater significance earning media attention. This had nothing to do with the arrival of the Pieman but involved the return of Ian Wallace as manager of Dumbarton. Once Britain's most expensive footballer, Wallace was going back to his roots.

"How much are they mate?" appeared to frighten the young programme seller, not used to Pieman's cockneyish tones. This was quickly remedied by sight of a fiver and a request for 3 copies - best sale of the day! At the time Boghead Park was the oldest of Scotland's football stadiums, having opened in 1879. A crowd of 724 was present on this occasion to witness a Dumbarton performance that began and finished well. The problem was the 85 minutes in between Billy Wilson's debut goal and Colin McKinnon's equaliser. The Bully Wee, the only team that the struggling 'Sons' had beaten in the previous 13 months, dominated after drawing level through Miller Mathieson. Paul Brownlie (son of John) then put Clyde ahead with a 30 yard volley which looked like winning the match until Mckinnon's late strike lit up a misty Boghead Park.

It was bitterly cold on the railway station after the match and the investment in a cup of coffee from the shop downstairs was welcome indeed. 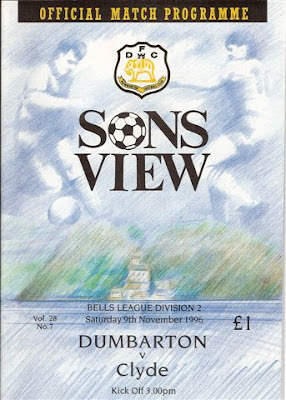