Margate was recorded as "Meregate" in 1264 and as "Margate" in 1299, but the spelling continued to vary into modern times. The name is thought to refer to a pool gate or gap in a cliff where pools of water are found, often allowing swimmers to jump in. The cliffs of the Isle of Thanet are composed of chalk, a fossil-bearing rock. The town's history is tied closely to the sea and it has a proud maritime tradition. Margate was a "limb" of Dover in the ancient confederation of the Cinque Ports. It was added to the confederation in the 15th century. Margate has been a leading seaside resort for at least 250 years. Like its neighbour Ramsgate, it has been a traditional holiday destination for Londoners drawn to its sandy beaches. Margate had a fine Victorian era pier which was destroyed by a violent storm in 1978.

Margate Football Club was founded in 1896 as an amateur club. In the years prior to the First World War the club played in several different amateur leagues, with little success, and played at various grounds in the Margate area before settling on a pitch at what would later become the Dreamland amusement park in 1912. This ground became known as the Hall-by-the-Sea Ground, taking its name from a local dance hall. In 1929 the club reformed once again and moved to its present home at Hartsdown Park, leasing part of the park from the local council for conversion into a football stadium. In 1972, Margate beat Swansea City and Walton & Hersham to set up a third round FA Cup tie against First Division Tottenham Hotspur, then UEFA Cup holders. A record crowd of over 14,000 packed into Hartsdown Park for a match which Margate lost 6–0. 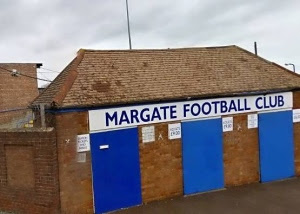 This Pieman travelled from London Victoria to Margate by train. Some refreshment in a traditional seaside café was followed by an entertaining 2-2 draw between the hosts and their visitors from Hampshire. 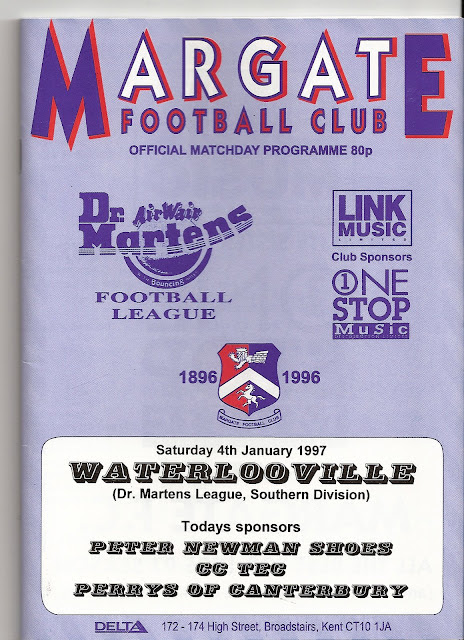