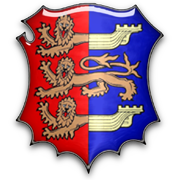 Hastings is a town and borough in East Sussex. The town is located 24 miles east of Lewes and 53 miles south east of London. In historical terms, Hastings can claim fame through its connection with the Norman Conquest of England; and also because it became one of the medieval Cinque Ports. The start of the Norman Conquest was the Battle of Hastings, fought on 14 October 1066; although the battle itself took place 8 miles to the north at Senlac Hill, and William had landed on the coast between Hastings and Eastbourne at a site now known as Norman's Bay. It is thought that the Norman encampment was on the town’s outskirts, where there was open ground; a new town was already being built in the valley to the east. That "New Burgh" was founded in 1069, and is mentioned in the Doomsday Book as such. William defeated and killed Harold Godwinson, the last Saxon King of England, and destroyed his army; thus opening England to the Norman Conquest. William caused a castle to be built at Hastings probably using the earthworks of the existing Saxon castle. Hastings was, for centuries, an important fishing port; although nowadays much reduced, it still has the largest beach-based fishing fleet in England. The town became a watering place in the 1760s, and then, with the coming of the railway, a seaside resort. The attraction of Hastings as a tourist destination continues; although the number of hotels has decreased, it caters for wider tastes, being home to internationally based cultural and sporting events, such as chess and running. It has set out to become "a modern European town" and seeks to attract commercial business in the many industrial sites round the borough.

The Football Club was founded in 1894 as Rock-a-Nore. The team played in local leagues until 1921, when they merged with All Saints (becoming Hastings & St. Leonards Amateurs) and moved to the Sussex County League and finished runners-up to Worthing. The club again finished second in the 1926–27 season, this time behind Southwick, but then moved back to the Hastings Football League due to ground problems. The club joined the Sussex County League again in 1952, but had to wait until the 1959–60 for success, finishing second in Division Two of the Sussex County League. In 1979, the club changed its name to Hastings Town and, in the 1979/80 season, won the Division Two championship and the Divisional Cup. The 1980–81 season saw the club win the County League Cup. In 1985, the old Hastings United ceased trading, Hastings Town applied for membership of the Southern League Premier Division, though, following objections from another club, were admitted into the league's Southern Division. The club also negotiated a long term lease with Hastings Borough Council for use of United's Pilot Field ground, moving from their former home at The Firs. 1991/92 culminated in a win at second placed Weymouth to clinch the league title and promotion to the Southern League Premier Division. 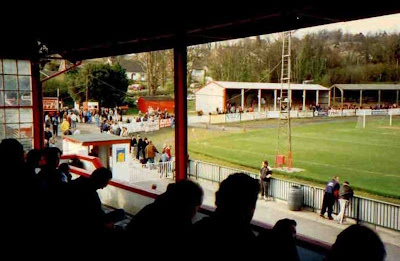 This Pieman travelled to Hastings by train from London Bridge. After some time on the sea front, a brisk walk of around 30 minutes was enough to reach the Pilot Field. A keenly contested match saw the home side overcome Chelmsford City by the only goal. 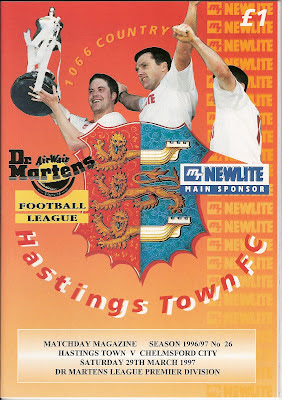