Alloa is a small burgh in Clackmannanshire, Scotland, 6 miles to the east of Stirling, on the north bank of the River Forth. Its most notable visible landmark is the 14th century Alloa Tower, the surviving part of the ancestral medieval residence of the Erskine family, the Earls of Mar. Though much altered both externally and internally, the Tower retains its original medieval wooden roof and battlements, as well as some internal features. It is one of the largest (and earliest) of Scottish tower houses. During the 18th century, Alloa thrived as a river port through which the products of Glasgow manufacture was exported to continental Europe. At that time, and until the 1950s, the main industry to the north and east of the town was coalmining, and an extensive waggonway existed to take the coal to the harbour. The Earls of Mar owned many of the coal mines, and Robert Bald, an unusually inventive local mining engineer, was instrumental in providing water power from the Gartmorn Dam to operate both the mines and other industries such as weaving. Many traces of the waggonway, and the Gartmorn Dam, can still be seen today, and although the dam is no longer used for energy production, or water supply, it is well used for fishing and leisure purposes.


A weekend excursion to Scotland enabled us to once again experience the delights of Glasgow. We were able to reach Alloa courtesy of a train from Queen Street to Stirling and then by bus from there. Recreation Park is walkable from the centre of town and can be reached in around five minutes.


The 388 in attendance witnessed a 2-0 victory for visitors Arbroath. This was a surprise result as Alloa Athletic were comfortably positioned in mid table whereas Arbroath were second bottom. Don McVicar scored the first from the penalty spot after 52 minutes. Jamie McCarron sealed victory with a second with 20 minutes remaining. Referee Mr L Mottram was officiating in his last match before jetting off to start a new career in Japan. It was fitting that Alloa was the venue on this occasion as Recreation Park was where he first officiated in the Scottish Football League. 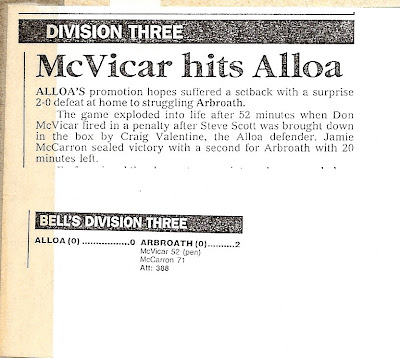 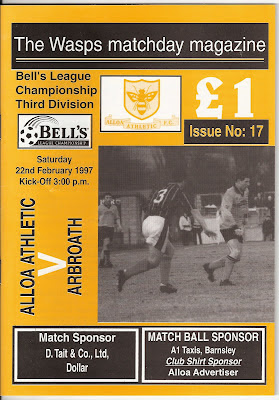