In 1880, cricket club Bainsford Bluebonnets founded a football club called Bainsford Britannia. In November the following year the football club changed its name, and East Stirlingshire Football Club was born. Based in Falkirk, The club's name is often abbreviated by outsiders to East Stirling, leading to the erroneous impression that they are based in or near the city of Stirling, 14 miles away; fans and other locals refer to the club by their nickname, The Shire. East Stirlingshire disappeared for a season in 1964-65. Against the fans' wishes, the club merged with Clydebank Juniors to create ES Clydebank. The new club played at Kilbowie Park that season before East Stirlingshire regained its identity and independence after a court case brought by the club's shareholders. Both clubs reverted to their original names the following season and East Stirlingshire returned to Falkirk. Clydebank returned to junior football before later securing a place in Division Two in 1966-67. 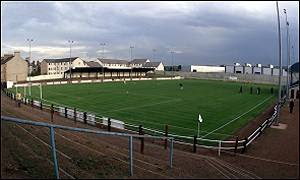 Already in Glasgow for a long weekend, with the intention of taking in the Saturday match between Alloa Athletic and Arbroath, it was with some surprise that I discovered this Friday evening encounter between East Stirlingshire and Albion Rovers. Firs Park is only about 10 - 15 minutes walk from Falkirk Grahamston station and therefore, easily accessible from both Glasgow and Edinburgh for evening fixture. 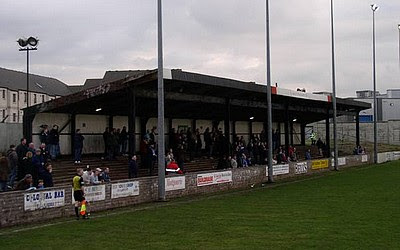 The ground is very basic with just the one seated stand (a fine looking structure) and the covered standing area opposite. However there was a tidy/clean feel about the place and I enjoyed the evening, enhanced by the humorous PA announcer. Albion Rovers ran out comfortable winners on the night. I thought the standard of football to be better than I had experience previously at this level, perhaps the floodlights and slightly larger than usual attendance helped (a few groundhoppers attracted by the Friday opportunity). 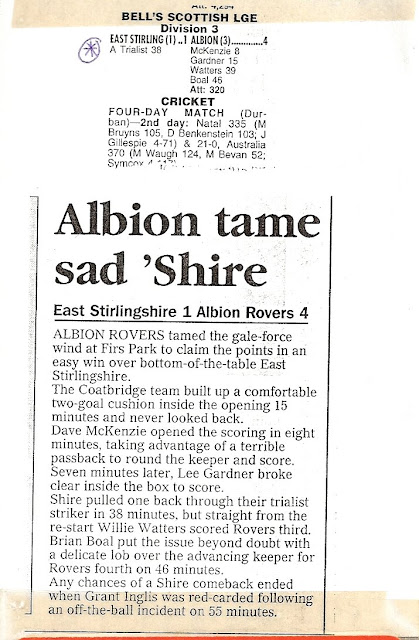 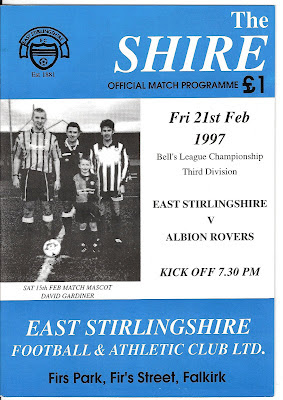