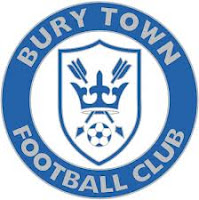 Bury St Edmunds is a market town in the county of Suffolk, England, and formerly the county town of West Suffolk. It is the main town in the borough of St Edmundsbury and known for the ruined abbey near the town centre. Bury St Edmunds supposed by some to have been the Villa Faustina of the Romans, was one of the royal towns of the Saxons.  Sigebert, king of the East Angles, founded a monastery there about 633, which in 903 became the burial place of King Edmund, who was slain by the Danes in 869. The town, originally called Beodericsworth, is known for brewing and malting, with the UK's largest British-owned brewery, Greene King, situated there, as is the smaller Old Cannon Brewery. Another beer-related landmark is Britain's smallest public house, The Nutshell, which is on The Traverse, just off the marketplace. It is allegedly the smallest pub in Britain and also believed to be haunted. Yearly, the 'Big Bury Piss Up' takes place on the first Friday of November. This day is supposedly to remember Big Beer Barry, a townsman that drank himself to death with Greene King IPA on the first Friday of November in 1973. The actor, Bob Hoskins is from Bury St Edmunds.

Bury Town Football Club was founded in 1872, and were one of eleven founder members of the Suffolk FA in 1885. Prior to changing its name to Bury Town, the club was known as Bury United, initially in the Norfolk & Suffolk League and then the Essex & Suffolk Border League. The club was also known as Bury St Edmunds FC and Bury North End FC for a while. The club moved into their current Ram Meadow ground in 1978. 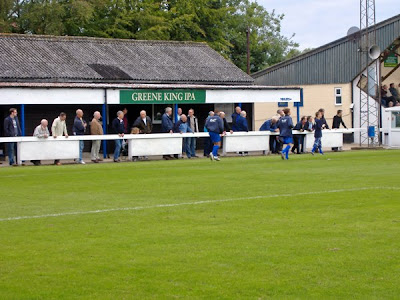 A Saturday afternoon excursion by train involved changing at Cambridge for an Ipswich bound service. A decent pub lunch and the obligatory few pints was followed by a very entertaining 2-2 draw. Ram Meadow is only a short walk from the town centre. 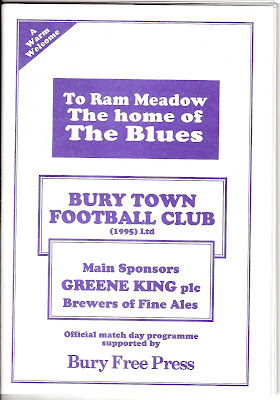