Man has lived on the moors around Bolton for many thousands of years evidenced by a stone circle on Cheetham Close above Egerton and Bronze Age burial mounds on Winter Hill. A Bronze Age mound was excavated in Victorian times outside Haulgh Hall. The Romans built roads from Manchester to Ribchester to the east and a road along what is now the A6 to the west. It is claimed that Agricola built a fort at Blackrod by clearing land above the forest. Evidence of a Saxon settlement exists in the form of religious objects found when the Victorian parish church was built. age. Fred Dibnah, a Lancastrian steeplejack who became a much-loved television historian of Britain's industrial past, was born and lived in Bolton. More recently Bolton is known for world champion boxer, Amir Khan and Peter Kay, comedian, actor, writer and producer. 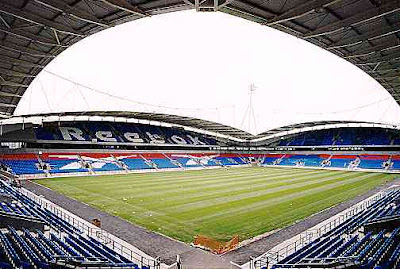 The Reebok Stadium is a modern, all-seater stadium with a capacity of 28,723. completed in 1997, it replaced the club's old ground, Burnden Park. Despite the improved facilities and larger capacity (and resultant larger ticket revenues), this move was unpopular with many of the club's fans. This was partly due to the new stadium being built out-of-town, and partly due to sentimental attachment to the old stadium and its history. In recognition of this, the street on which the stadium is situated is called Burnden Way. The Stadium is located in neighbouring Horwich. There is a local railway station on the Manchester - Preston line but as many will testify, services from this station after matches are not always geared up to the demand. There is of course plenty of car parking space available and the numerous retail outlets in the vicinity assist with this (in their interests of course). 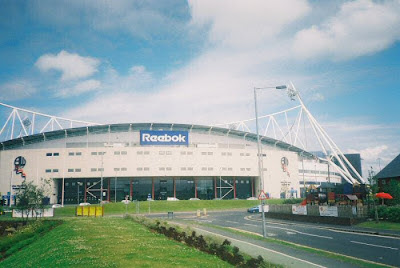 The Reebok Stadium is impressive. The design is interesting, with the lower tier of the each stand being rectangular, and all the upper tiers semi circular. As with all new stadia, there is a certain uniform appearance. However visiting supporters will not miss Burnden Park as in the latter years the view from the limited visitors section was the worst in the Premiership. 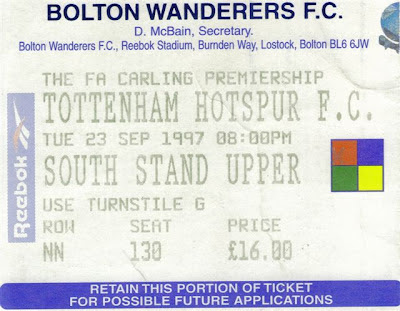 The first competitive match at the stadium was a 0-0 draw between Bolton and Everton on Monday September 1, 1997. Nineteen days later, Bolton drew 0-0 with Manchester United. Therefore it was on the Pieman's visit that the scoreless duck was broken. The first player to score a competitive goal at the stadium was Alan Thompson, from the penalty spot. The honour of scoring the first goal from open play went to Spurs man Chris Armstrong, who later in his career had a short spell with Bolton Wanderers. Talking of Ducks, we also spent a good hour looking for Steve Duke after the match (he has now moved to Blackpool to improve his geography of the area - Ed) 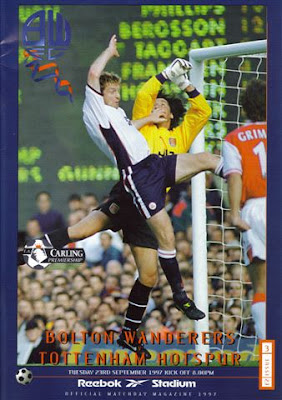 Subsequent visits to the Reebok Stadium