Eynesbury is a settlement in Cambridgeshire. It forms part of present-day St Neots, but before 1876 was a separate village. Eynesbury is made up of a number of different areas, the oldest area of which, around the Berkley Street/St Mary's Street area predates any other part of St Neots. Indeed the town was originally called Eynesbury, until the establishment of the priory after Benedictine monks stole the remains of Saint Neot from the Cornish. This theft had the backing of the royal court. In the 1960s and 1970s, Eynesbury grew quickly thanks to London overspill, along with various other parts of the town such as Eaton Socon. 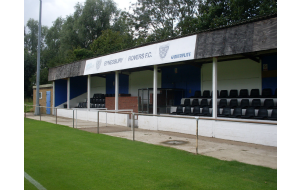 Eynesbury Rovers FC was established in 1897 and spent their initial years in local leagues. Their first major honour was the Hunts Senior Cup in 1913–14. They won the Hunts Junior Cup in 1921, 1927 and 1932, and were champions of Division Two of the Bedford & District League in 1926–27, 1930–31 and 1931–32.  In 1934 they joined Division Two of the South Midlands League and were promoted to Division One at the end of the first season in the league. After World War II the club switched to the United Counties League. They won the Hunts Senior Cup four times between 1946 and 1951, and the Hunts Premier Cup in 1951, before joining the Eastern Counties League in 1952, becoming the most westerly club ever to play in the league.

This Pieman travelled by car to St Neots for this match. After exploring the town and enjoying lunch on the banks of the River Great Ouse, it was on to the Alfred Hall Memorial Ground where an unspectacular end of season match saw Holbeach United take the points as a result of their solitary goal. 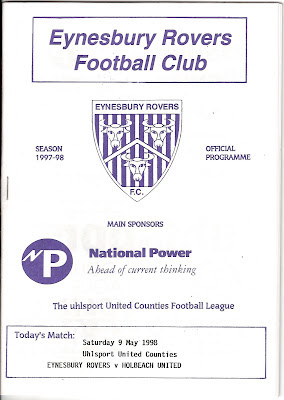