Altrincham is a town within the Metropolitan Borough of Trafford, in Greater Manchester. It lies on flat ground south of the River Mersey about 8 miles southwest of Manchester city centre, Historically a part of Cheshire, Altrincham was established as a market town in 1290, a time when most communities were based around agriculture rather than trade, and there is still a market in the town today. Further socio-economic development came with the extension of the Bridgewater Canal to Altrincham in 1765 and the arrival of the railway in 1849, stimulating industrial activity in the town. Altrincham today is an affluent commuter town, partly because of its transport links. 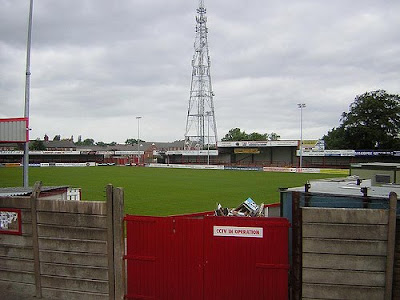 Altrincham F.C.'s name was Broadheath F.C. from their foundation in 1891 until it was changed to the present name in 1903. Playing in the Cheshire League for most their early history, Altrincham achieved little success until the 1960s when Altrincham director Noel White hired Freddie Pye as manager. Altrincham, uniquely for a non-League team, made the third round of the FA Cup on four consecutive occasions between 1979 and 1982. Altrincham's fine account in the FA Cup against top league opposition has seen them defeat Birmingham City in 1986 (away from home, the last non-league club to date to achieve this against a top league club), and also hold both Everton in 1975 and Tottenham Hotspur in 1979 to draws, although Altrincham lost the replays in both cases.

Moss Lane is only a short walk from Altrincham station. Having watched Manchester United host Spurs at Old Trafford in a noon kick off it was possible to get across to this match by tram afterwards. Kidderminster Harriers had already been promoted to the Football League. By contrast Altrincham were relegated at the end of the match. 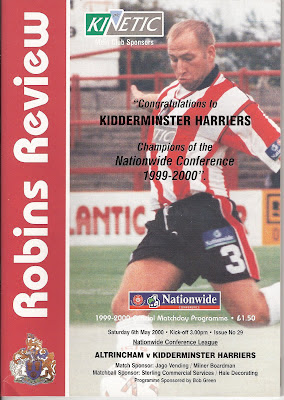