Until the Roman conquest of Britain, Cardiff was part of the territory of the Silures – a Celtic British tribe that flourished in the Iron Age – whose territory included the areas that would become known as Breconshire, Monmouthshire and Glamorgan. The city of Cardiff is the county town of the historic county of Glamorgan (and later South Glamorgan). Cardiff is part of the Eurocities network of the largest European cities. The Cardiff Urban Area covers a slightly larger area outside the county boundary, and includes the towns of Dinas Powys and Penarth. A small town until the early 19th century, its prominence as a major port for the transport of coal following the arrival of industry in the region contributed to its rise as a major city. Cardiff was made a city in 1905, and proclaimed the capital of Wales in 1955. Since the 1990s, Cardiff has seen significant development. Industry has played a major part in Cardiff's development for many centuries. The main catalyst for its transformation from a small town into a big city was the demand for coal required in making iron and later steel, brought to the sea by packhorse from Merthyr Tydfil. This was first achieved by the construction of a 25-mile long canal from Merthyr (510 feet above sea level) to the Taff Estuary at Cardiff. Eventually the Taff Vale Railway replaced the canal barges and massive marshalling yards sprang up as new docks were developed in Cardiff – all prompted by the soaring worldwide demand for coal from the South Wales valleys. 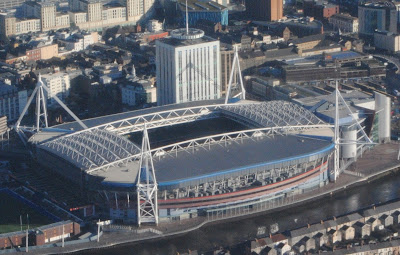 The Millennium Stadium (Welsh: Stadium y Millennium), is the national stadium of Wales, located in Cardiff. It is the home of the Wales national rugby union team and has also staged games of the Wales national football team. Initially built to host the 1999 Rugby World Cup, it has gone on to host many other large-scale events. Until 1969, Cardiff RFC and Wales both played their home matches on the same pitch at Cardiff Arms Park, but all this changed in the 1969–70 season. As a result of an agreement between Cardiff Athletic Club and the WRU, the National Stadium project had established that a new stadium for international matches and events was required, with Cardiff RFC moving to a new purpose built stadium on the original cricket ground at the site of the former Cardiff Arms Park stadium. Construction involved the demolition of a number of buildings, primarily the existing National Stadium (Cardiff Arms Park), Wales Empire Pool (swimming pool) in Wood Street, Cardiff Empire Telephone Exchange building in Park Street, the newly built Territorial Auxiliary & Volunteer Reserve building in Park Street, and the Social Security offices in Westgate Street.

My visit to the Millennium Stadium was to watch the 2002 Football League Cup Final between Tottenham Hotspur and Blackburn Rovers. For the period that Wembley Stadium was being rebuilt, cup finals and other big matches were staged in Cardiff. On a wet Sunday afternoon, the retractable roof was closed to cover the stadium. Blackburn opened the scoring with a goal from Matt Jansen, but Christian Ziege soon equalised for Spurs. Andy Cole scored the winner in the 68th minute with a typical instinctive strike after mistakes in the Spurs defence. Les Ferdinand could have made the match square after a close one-on-one chance with Friedel, but failed to make anything of it. In the final minute Teddy Sheringham controversially had a claim for a penalty turned down by referee Graham Poll. 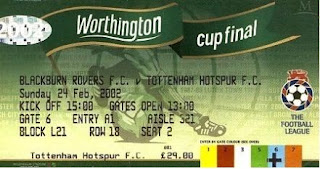 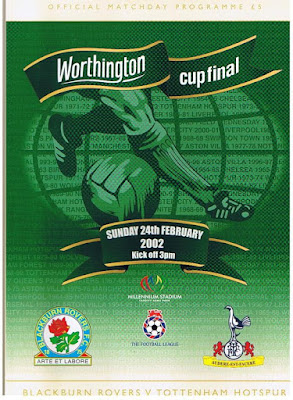