Spennymoor is a town in County Durham, England, founded over 160 years ago, which stands above the Wear Valley approximately seven miles south of Durham. The Town Council area, which includes the villages of Kirk Merrington, Middlestone Moor, Byers Green and Tudhoe, has a population of approximately 20,000. Spennymoor was where Henry Bessemer discovered and patented the Bessemer process which revolutionised the world we live in by allowing the mass production of steel and pig iron at a low cost. Dating from 1183, The Whitworth Hall estate was owned by and home to the Shafto family for over 300 years, including County Durham MP "Bonnie Bobby Shafto", made famous by the well known ballad and nursery rhyme. It is now the site of Whitworth Hall Hotel and the deer park for which the estate is famed is still well tended, as is the walled garden.

The Pieman's visit to Brewery Field was en route to a match at Sunderland the following day. We were staying in Durham overnight and Spennymoor was an ideal stopping of point. Having watched a feisty Manchester derby on TV at a nearby pub, it was a joy to discover Black Sheep on handpump in the clubhouse at the ground. 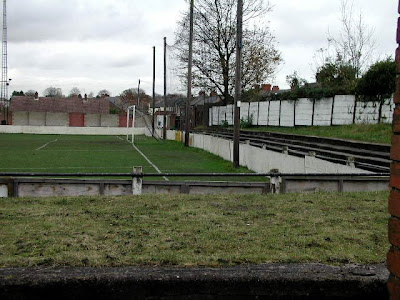 A comprehensive victory for the home side over their visitors from Yorkshire entertained the Pieman and his chums. Misfortune struck the club in 2005 when they folded, causing controversy over unfulfilled fixtures. The club was reborn as Spennymoor Town, taking over Evenwood Town and played at the Brewery Field albeit several leagues lower than previously. 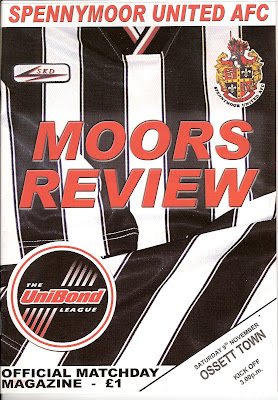