Crawley is a town and local government district with Borough status in West Sussex. It is 28 miles south of London. The area has been inhabited since the Stone Age, and was a centre of iron making in Roman times. Crawley developed slowly as a market town from the 13th century, serving the surrounding villages in the Weald; its location on the main road from London to Brighton brought a passing trade, encouraging the development of coaching inns. It was connected to the railway network in the 1840s. Gatwick Airport, now one of Britain's busiest international airports, opened on the edge of the town in the 1940s, encouraging commercial and industrial growth.


After the Second World War, the British Government planned to move large numbers of people and jobs out of London and into new towns around the South East England. The New Towns Act 1946 designated Crawley as the site of one of these. A master plan was developed for the establishment of new residential, commercial, industrial and civic areas, and rapid development greatly increased the size and population of the town in a few decades. 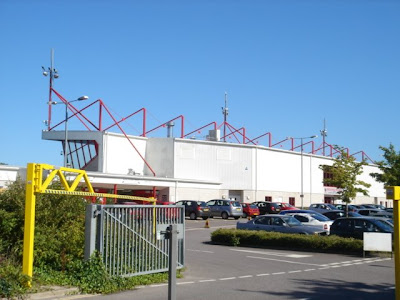 Broadfield Stadium is a multi-use stadium in Crawley, England. It is currently used mostly for football matches and is the home ground of Crawley Town F.C. The stadium has a capacity of 4,996 people, and is owned by Crawley Borough Council. 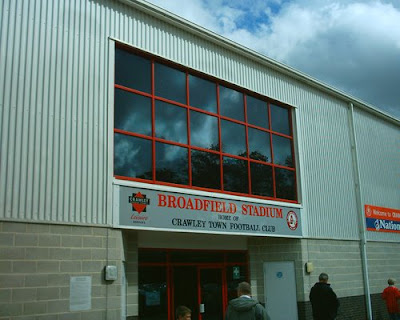 The Pieman walked from Crawley station to the ground and although his leisurely stroll took a detour via a wonderful Hall and Woodhouse pub, 20 minutes is all that was required. A fine stadium is the Pieman's verdict on Broadfield. The young Spurs side took time to settle into the match, but once they did some fine passing led to goals from Slabber, McKie and Marney. Subsequent visit to the Broadfield Stadium