Bowers Gifford, or Bures Gifford, is a small village, 4 miles West South West of Rayleigh. It once belonged to Westminster Abbey, but at the time of the Doomsday Survey it was held by Ralph Peverell and Walter the Deacon. The season 2004/05 saw a new name on the footballing map when Bowers United took Pitsea Football clubs name to produce Bowers and Pitsea United Football Club. With a new start and a new team at the helm maybe success is just around the corner because a strong link has been established with the local community and the clubs facilities offer the residence a large Clubhouse, Bar and Function room together with a ground capacity for 2000+ spectators. This includes seating for 180 in a well appointed stand. Excellent floodlighting is also an advantage should the club seek to play at a higher level. 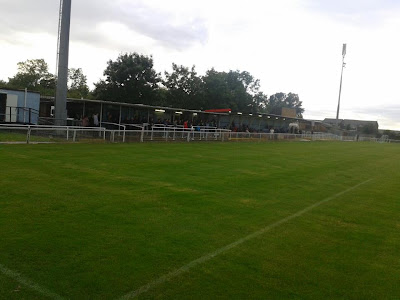 For some reason I always thought of Bowers as being situated in rural farmland, miles from civilisation and perhaps this is why I have never ventured to this venue before. In truth the Len Salmon Stadium is within easy walking distance of Pitsea station and although the match was later kicking off than the advertised 19.45, I was still able to catch the 22.02 to Liverpool Street.

There are a couple of Fish & Chip shops en route to the ground but little by way of pubs. I guess one option would be to stop off at Basildon where there is a Wetherspoons by the station, but then for midweek matches you run the risk of an encounter with Hutton's finest having his post work 7 pints before going home for dinner (sorry Paul!)

Halstead Town reached the final of the Essex Senior Cup with a 3-0 victory over their hosts. In the end this was comfortable but if Bowers had got the all-important first goal that their early play deserved then it might have been a different story. Both sides contributed to an excellent match.

Peter Jones was also there and is a regular attendee of non-league football. He may prefer this to the fare served up by his beloved West Ham these days! 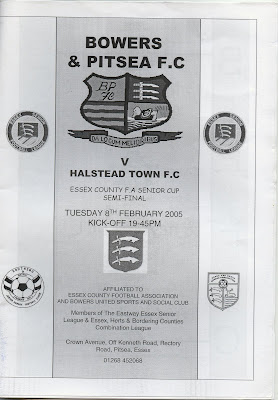