Brandon is a village in County Durham, situated a short distance to the southwest of Durham. Brandon was originally one of the seven townships within the ancient Parish of Brancepeth. It grew from a sparsely populated agricultural area into a populous mining district after the establishment of collieries and later coke and fireclay works. Until the 19th century Brandon village, formally known as East Brandon, was one of the larger settlements in Brancepeth Parish. Brandon United F.C. were originally formed as a Sunday league team called Rostrons, joining the Third Division of the Durham and District Sunday League in 1968/69. They became Brandon United in 1972 and by 1976/77 they had been First Division champions four times and Durham County FA. Sunday Cup winners three times. In 1977, they switched to Saturday football, joining the Northern Football Alliance where they played three successful seasons, winning the League Championship and League Cup twice. Mary Emery's mother lives at Brandon.

A Sunday afternoon appointment with the Toon at St. James Park, engineering work between Darlington & Newcastle and a complete lack of cheap train fares prompted a car excursion to the North East. Our regular chauffer wanted to take in some delightfully bracing Durham air. It was that historic city that we arrived in on Saturday lunchtime. 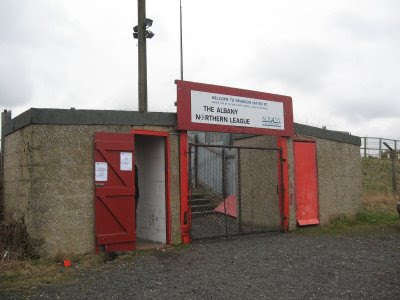 
Our selected afternoon venue was Brandon United who were entertaining Whitley Bay in a Northern League Division One fixture. Brandon is only a few minutes drive to the west of Durham and the landlady of the hotel/pub (superb hospitality) where we stayed, drove us to the ground. She was originally going to drop us at Durham bus station but I guess Ian Scott charmed her into an extension of our company.

The Welfare Ground is to say the least, very basic with a lot of the surrounding metal fencing attempting to blow away in the strong winds. The ground is high lying overlooking Durham and I guess will have very good drainage. However, you are exposed weather wise and Saturday certainly tested the resolve of the sparse crowd. I can report that every pie and pasty was sold and the attendance of a certain Matt Smithurst is merely coincidental. The clubhouse before the match was friendly with drinks at good reasonable prices. You can play pool here for 20p. Annual membership of the club is £1 (25p for OAPs) and yes Bob they do have regular Karaoke!

After a number of refreshing beverages post match in the local hostelries we headed back to Durham for more of the same. Deja vous struck at closing time when the landlady of the Dun Cow insisted on driving us back to the hotel. Very friendly these northern folk (or was she just tidying up the bar? - Ed).

As for the match, Brandon went 3-0 ahead before Whitley Bay levelled at three each. In the last minute Brandon secured the points with a twice taken penalty. Gripping stuff for £4 admission. Programmes 50p (basic but for the price OK). 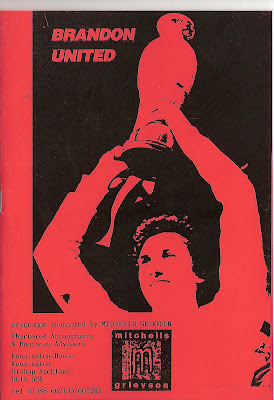