Woking is a large town, located to the west of Surrey in South East England. It functions as a dormitory town of the London commuter belt and is located 23 miles south west of Charing Cross in central London. Woking also plays a role in literature: it is the town in which the Martians landed in H. G. Wells science fiction novel The War of the Worlds. It also features in Douglas Adams's The Meaning of Liff, as the word for when you go to the kitchen but forget why. Some 2 years after an aborted visit (waterlogged pitch - which drained very quickly and probably would have passed the test if the ref had been patient - Champions League on TV! - Ed) to Woking's 'other' club, Karaoke Bob and I finally managed to 'tick this one off'.

Some will already know that Woking FC play a couple of hundred yards away from Westfield but postcodes are probably the only similarity. Whilst Kingfield boasts some of the better facilities in non-league football, Westfield's Woking Park ground is very basic. An old clubhouse resembling a cricket pavilion was the only structure apart from the dug outs (I do not count potting sheds as being intrinsic to the ground).

Woking FC were hosting Stevenage Borough (1-2) at the same time and it was strange hearing the crowd noise from that match. We even thought we heard Phil Bryant singing! We were treated to a decent game resulting in a fair 2-2 scoreline. A 7.30 kick off (rare these days) was a pleasant change. An easy stroll from Woking station which I would estimate to be 12 minutes away at the most. 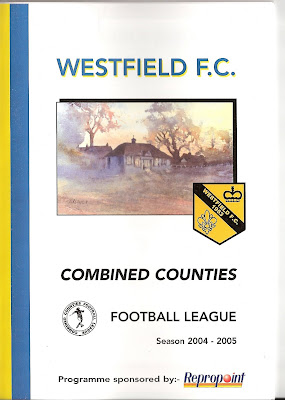