In 1197 a castle was built by the River Ayr. Shortly afterwards, in 1205, King William the Lion created a burgh at Ayr. He laid out streets and set aside plots of land for building houses. William also started a market at Ayr. (In those days there were few shops so if you wished to buy or sell anything you had to go to a market). Once the market at Ayr was up and running people would come to live in the new town. William also granted the people of the new town of Ayr a charter (a document granting the townspeople certain rights and privileges). From 1261 Ayr also had an annual fair. (In the Middle Ages fairs were like markets but they were held only once a year and they attracted buyers and sellers from a wide area).

With Ryanair now having extended their Saturday timetable, it is possible to get back to Stansted the same day from most venues. In truth though, I was on unfinished business as the previous season I had arrived in Ayr to find their match had been postponed. On that occasion Kilmarnock hosted Dundee and a new ground was visited avoiding a wasted trip. The visit of Stranraer promised far more than was delivered. In blustery conditions, a draw was a fair result but considering a win would have almost guaranteed a second successive promotion for Stranraer, I thought their tactics a bit negative. Nerves perhaps?

Somerset Park is a traditional old stadium, mainly terraced with just the one seated stand. It did make a pleasant change to watch a match from the terracing. Prior to the football we visited four of the local hostelries, the most notable being the ‘Tam o Shanter’ Inn, named after Robbie Burns poem. Ayr United’s nickname ‘Honest Men’ is also derived from this source. Karaoke Bob Gilligan could recite this poem and would do so for a pint! It was here that we sampled ale from the Arran Brewery and very good it was too.

Ian and Andy Scott joined me in purchasing ‘Haggis from the Heart of Burns Country’ from a local butchers in the high street and Kristian Jarvis declared his love for the Scottish square sausage he sampled for breakfast. Karaoke, Kristian and I opted to stand with the Stranraer support, this meant we missed the incident where Andy Scott pleaded with his father to take his photograph with the Ayr mascot ‘PANDAmonium’. This father/son bonding lark was being stretched to the limit and if they thought this would get them a mention in these columns then they were right! Anyway 0-0 it was and Stranraer achieved their promotion. 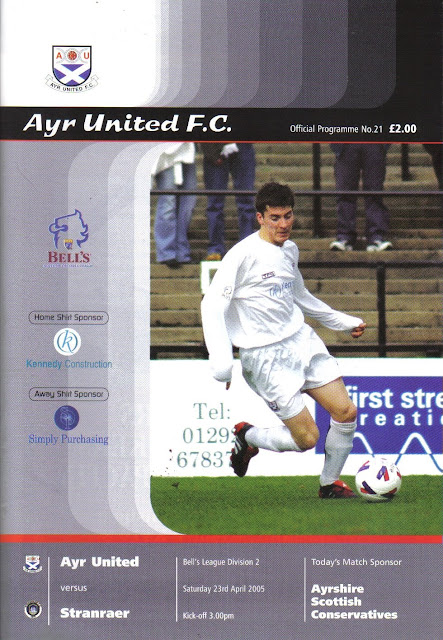