Morpeth is situated in Northumberland. It is on the River Wansbeck, which flows east through the town. The administrative centre both of Castle Morpeth borough and of the County of Northumberland, it prospered in the 12th century, when it was granted market status by King John.

A Wednesday morning meeting at Longbenton facilitated an overnight stay in Newcastle and a further opportunity to explore the delights of Northern League football. I initially chose Morpeth due to there being the 22.25 train back to Newcastle post match but at the time this was a league fixture against different opposition. It took just over 20 minutes to reach Morpeth and armed with a map, I was able to familiarise myself with the route from the station - this was just as well as I felt obliged to give the map to a car load of West auckland Town players (Dennis Waterman absent) who had become lost!

Immediately prior to this, I took advantage of the real ale at the Joiners Arms. My choice was 'Workie Ticket' from the Mordue Brewery and looking around the bar it appeared that this establishment often carries guest ales alongside the varying Mordue products. I'm not sure if the pub is in this year's Good Beer Guide CAMRA but it has certainly featured in the recent past (Also Westons for you Ciderman!)

Craik Park is an oval shaped ground with a cinder (speedway type) track around it. Both sides of the ground have covered accommodation, with a decent (200ish) seated stand at the main/clubhouse side of the ground. Now with this match having a 7.45 kick off, extra time, possible penalties and a 25 minute walk to Morpeth station does not fit when attempting to catch the 22.25 train. Step in Alan Price (good Geordie name that). Alan is a Newcastle United season ticket holder/Gateshead supporter and resident/Northern League club member and most importantly car owner! Before the match this fine gentleman offered me a lift back to Newcastle. Failing that I could also have called in a favour from those West Auckland players who I had assisted earlier.


Extra time it had to be with West Auckland edging an entertaining League Cup 4th round tie 2-1 (1-1 at 90 minutes). It got progressively colder as the match went on and every so often we were treated to a flurry of snow. Therefore the lift back to town was greatly appreciated with Alan dropping me off at the Royal Station Hotel but not before giving me a copy of the latest edition of Northern Ventures Northern Gains - the superb Northern League magazine. Alan has a letter published in the March edition, bemoaning the demise of the Saturday Pink classified sports paper. I understand from Alan that the Craik Park site on Morpeth Common stands on an old wartime munitions dump. This has caused frequent drainage problems. Les Scott (club secretary) said that the club have only recently discovered this and were certainly unaware when moving to Craik Park in 1994. 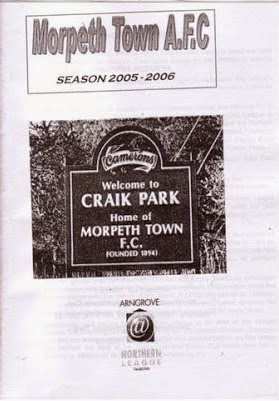