The story of Salisbury began 2,500 years ago when an Iron Age fort was built on Salisbury Hill about 2 miles north of the modern town centre. In the 6th century AD the Saxons invaded the area. In 552 Saxons and Celts fought a battle at Salisbury Hill. The Celts were defeated and fled westwards. The fort probably lay abandoned for centuries. However by the early 11th century a settlement had grown up on the site of the old fort. In 1003 the Vikings raided Wilton and some of the survivors may have fled to the safety of Salisbury Hill and founded a new settlement. The new town had a mint and a market. About 1069 William the Conqueror built a wooden castle to overlook the settlement and keep the inhabitants in line. In 1075 a bishop moved his seat there. However Sarisberie, as it was called, was a small settlement, much smaller than nearby Wilton. It probably only had a population of a few hundred. In the 20th century Salisbury continued to grow quite rapidly but it remained an agricultural town. Today one of the main industries in Salisbury is tourism which is what attracted us this weekend. We arrived in Salisbury at lunchtime and after a meal wandered over to the splendid cathedral. Afterwards I was able to walk to the Westwood Recreation Ground, the home of Wessex League side, Bemerton Heath Harlequins.

As was true of Long Melford and Cornard United (visited by the Pieman the previous season), Harlequins ground is surrounded on three sides by conifers. This gives a real enclosed effect for small venues and apart from anything else, assists in the retrieval of wayward shots. The fourth side (behind one goal) houses the turnstile block, clubhouse, tea bar and dressing rooms. Above this complex is an executive type veranda from where the game can be viewed. 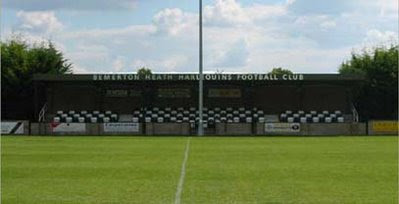 The stand is a decent structure affording a good unhindered view of action. Surrounding the playing area is a brick wall which combined with all other aspects gives this venue a very professional appearance. Bemerton Heath Harlequins triumphed 4-1 to progress in this national competition but not before having to overcome a resilient Shrewton who more than held their own before the break. With a little more luck they would have led at the break. The home side were worthy winners though and the screamer that almost burst the net in the closing minutes was the icing on the cake. I invested in a bus ticket to get back to Salisbury station. There appears to be a very regular service on Saturdays. 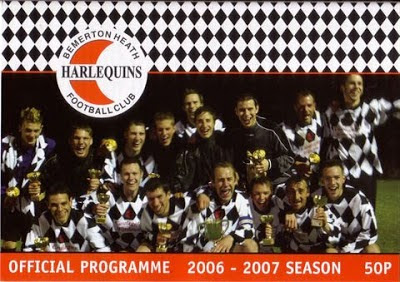