Thatcham is recorded in the Guinness Book of Records as the oldest continuously inhabited settlement in the country. People have lived here since prehistoric times: The Mesolithic village, discovered near the Sewage Works in Lower Way Lane, being of particular note as one of the finest temporary settlements of nomadic hunters ever found. Hearths and flint knapping floors were uncovered, as well as flint and even bone tools, and the remains of numerous animals, including elk, beaver, wolf and pine marten! No reference to Thatcham would be complete without mention of the fact that this community has produced three holders of the Victoria Cross. Even more distinctive is the fact that two of these medals are held by brothers. In 1915 the VC was awarded posthumously to Alexander Buller-Turner who was killed as he drove back the Germans single handed thus saving the lives of many of his Royal Berkshire Regiment comrades. During World War Two Alexander's brother, Victor Buller-Turner, gained the VC for distinguished service whilst commanding a battalion of the Rifle Brigade in North Africa. Earlier, in the Boer War in 1900, William House had been awarded the VC for the rescue of a wounded comrade whilst under fire. 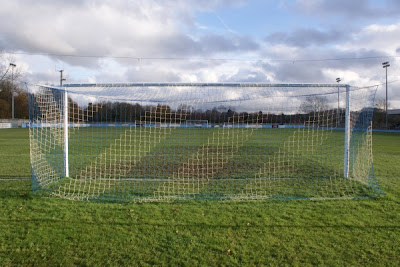 A midweek, after work, jaunt for the Pieman and a relatively easy venue to reach. Waterside Park is only a few hundred yards from Thatcham station and can be reached via London Paddington and First Great Western trains. I arrived with plenty of time to spare and went exploring on the town side of the railway line. There are a number of new housing estates in this area and in their midst I stumbled across a fine fish & chip shop. I opted for saveloy & chips and was not disappointed. 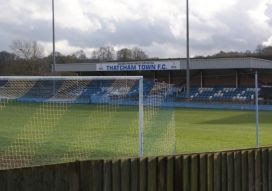 Near the railway station is the pleasant Swan public house on Station Road. I felt obliged to wash the food down and enjoyed a pint of Southern Glory (Eldridge Pope). I did think it odd as Eldridge Pope ceased brewing some years ago but it appears Burtonwood brew this for them. 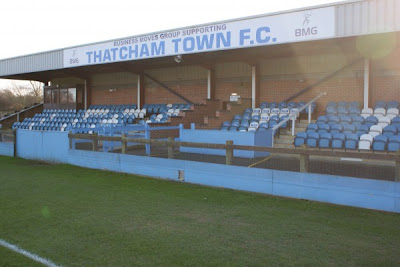 Refreshments dealt with, it was onwards and over the railway crossing, over the Kennet & Avon Canal to the ground; and what a fine venue it is. The main covered stand seats about 280 and either side of the dugouts on the opposite side are additional open seated stand each holding a further 38 seats. The playing surface was in great condition and this aided a decent match between two sides that wanted to play attractive football. Thatcham always had the edge and were worthy winners, scoring twice in the opening 25 minutes and adding a third with a couple of minutes to go. Abingdon United scored with virtually the last kick of the match, direct from a free kick. The 21.47 train got me back to Paddington just before 23.00, I changed to an inter city service at Reading which saved me 20 minutes. 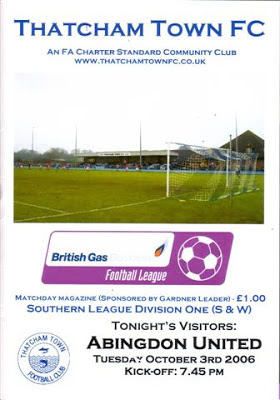