Leverkusen is a city in North Rhine-Westphalia, Germany. It is located on the eastern bank of the Rhine, half way between Cologne and Düsseldorf. Population: 161,342 (2005). The city of Leverkusen is a product of economic growth in the Rhine-Ruhr region. It was a rural area until the late 19th century. The present city is made up of several villages, originally called Wiesdorf, Opladen, Schlebusch, Lützenkirchen, Steinbüchel, Rheindorf and Bergisch-Neukirchen. Wiesdorf, dating back to the 12th century, was chosen by the apothecary Carl Leverkus for establishing a dye factory in 1860. The factory was taken over by the Bayer company in 1891. The company moved its office to Wiesdorf in 1912, turning the town into the centre of German chemical industry.Leverkusen was founded in 1930 by merging the above mentioned villages that had become towns in the meantime. Today the town is home of the somewhat successful football club Bayer Leverkusen.A mid morning flight on Wednesday from Heathrow to Düsseldorf followed by a short train journey enabled Pieman and Ciderman to reach Cologne, where accommodation had been booked for 2 nights. 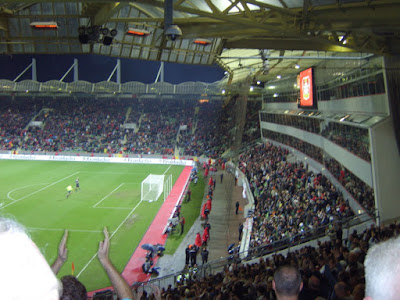 Cologne (Köln), like other German cities, is blessed with numerous bars, restaurants and cafes. Kölsch is a local beer speciality brewed in Cologne. It is a clear beer with a bright yellow hue, and it has a prominent, but not extreme, hoppiness. It is less bitter than the German standard beer, Pils. Furthermore, Kölsch is a top-fermented beer, meaning that it is fermented rather quickly at 15 to 20°C (60 to 68°F) causing the yeast to rise to the top, while Pils is a bottom-fermented beer fermented slowly at much colder temperatures. Kölsch yeast is often confused with bottom-fermenting yeast because of its relatively low fermentation temperature. Although Kölsch ferments colder than most ales, it is definitely an ale. It is usually served in long, thin, cylindrical 0.2 litre glasses.We sampled Gaffel, Gilden, Dom, Sion, Fruh and Weiss Brau. The latter of which was brewed at the pub restaurant of the same name, where we also dined on the Thursday. 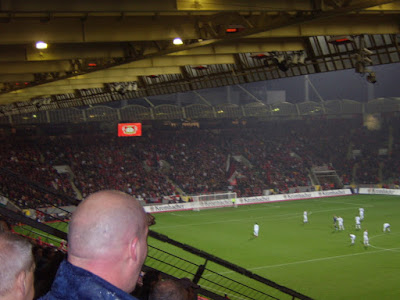 Amidst our fact finding tour of the city, we made time to visit the Müngersdorfer Stadion home of 1FC Köln. The club are presently in mid table in Bundesliga 2 and are clearly a shadow of their past. The stadium (capacity 50,997) is impressive and it is ironic that neighbours Leverkusen with half the capacity are prominent in the higher league. A 15 minute tram journey from the centre of town takes you directly to the stadium.A similar tram journey takes you to the lesser known Bezirkssportanlage Köln-Süd, home of SC Fortuna Köln. This club have fallen on hard times and following insolvency, currently play in the fifth division (Verbandsliga Mittelrhein) where they finished 7th in 2005-06. Our hotel was only a few minutes walk from the magnificent Köln Cathedral, the world's tallest building from 1880 to 1890. 82% of the city was flattened as a result of allied bombing during WW2 but remarkably the cathedral survived. We took the opportunity to explore and were impressed with this mighty, but dark, structure. I will remain impressed despite Walthamstow resident Poddy comparing it to Hogwarts from Harry Potter. After his similar comments (Prague - Walt Disney) earlier this season, I am relieved he did not venture to the Besiktas match, as explaining his appreciation of architecture to the Turks might have been a tall order! 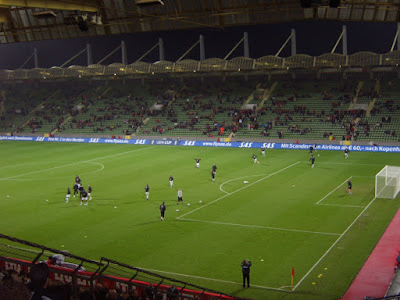 On the evening of the match, a short train journey to Leverkusen followed by a 15 minute walk enabled us to reach the BayArena; (capacity 22,500). The stadium is covered throughout which was welcome on a very wet evening. Electric heaters positioned above the spectators meant that nobody would be cold (would have been nice just to have had one of these at the youth team match - Ed). Tottenham Hotspur maintained their 100% record in this competition this season, courtesy of a goal from Dimitar Berbatov, who joined from Leverkusen this year.On the Friday, prior to our return flight, we opted to explore Dusseldorf and took the opportunity to sample a couple of the local brews, Frankenheim and Schlösser. These beers are very different to those brewed in Köln and are known as Alt. The altbiers of Düsseldorf are the classic examples of the style: copper in colour, dry and with a long hoppy finish. Very pleasant indeed and considering how close the two cities are to each other, an excellent reminder of the different cultures that exist within Germany. Glad to get home Friday evening though and crossing London via the tube from Heathrow took twice as long as the return flight.