Horley is a town in Surrey, situated between Reigate, Redhill and Gatwick. With fast links by train to London, it has grown popular with commuters in recent years. In early times the Weald was a densely forested and marshy area unsuitable for agricultural purposes. During Saxon times, the Manor of Horley came under the control of the Benedictine Abbey of St Peter at Chertsey. No mention is made of Horley in the Doomsday Book and it is thought to have been included in the northern manor returns. The Manor passed to Henry VIII on the dissolution of the monasteries in 1539 and changed hands several times during the next sixty years. Horley is home to the Archway Theatre, Britain’s only "under the arches" theatre. Located under the arches of the Victoria Road railway bridge, the theatre consists of a bar, auditorium, studio and rehearsal rooms. The main auditorium seats 95 and the studio seats 40. The company presents 10 full productions each year as well as number of studio events and youth productions. 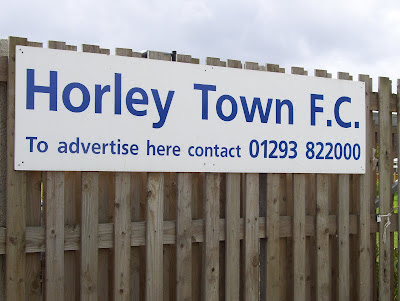 Hotspur and I caught the train (from London Victoria changing at East Croydon) to Horley station and I was pleasantly surprised to find a Wetherspoon pub 'The Jack Fairman' a couple minutes walk along Victoria Road. Here I enjoyed a pint of 'Five Generations Bitter' from W.J.King of Horsham. Where possible in these establishments, I try to sample the local brews and this proved a good choice (do you know this beer Mike Parsons? - Ed). I should not have been surprised to bump into Colin Marshall in this pub (him of Bacon Roll fame - Ed) as he is known to frequent Wetherspoon establishments in tandem with non-league football. He had already visited the new Wetherspoon outlet at Gatwick Airport before we met. 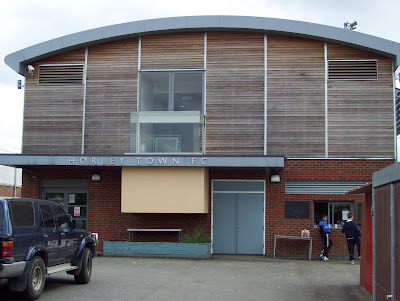 The ground can be reached in 20 minutes from the station if you take advantage of a couple of short cuts through a housing estate. The Pieman visited Horley Town's previous ground back in 1994, witnessing a 1-1 draw with Farleigh Rovers. That venue was on the opposite side of town. Sited on land that had been held in trust since 1947 for the people of Horley in memory of those that died in the defence of their country. The ground was named “The Defence”. 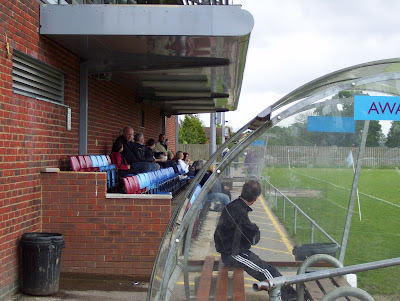 The New Defence is a well appointed ground. The clubhouse (serves real ale - Adnams bitter on Saturday), changing facilities and seated stand are housed in one impressive block. There is also additional covered terracing behind one of the goals. On a previous visit, Colin had wondered why he had been the only spectator sitting in the stand. It was some while later that he was tipped off that he had been sharing the seats with a wasps nest! Thankfully that was some time back and Colin, now a senior citizen according to the gateman, was able to return to the stand for the second period of this match. 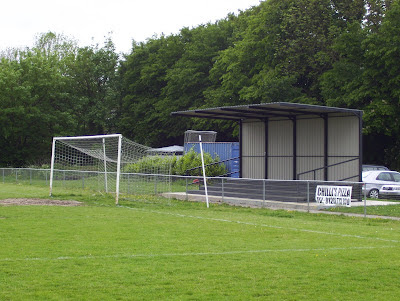 Going into this match, Horley Town had a great chance to win the Division One League title. This was one of two remaining fixtures and maximum points would guarantee the title. All was going well for most of the match. An early goal following a goalkeeping error was added to before the break and Horley appeared to be in control. However, 5 minutes before the end of the match Sheerwater pulled a goal back and as can often happen in these pressure situations, panic set in. This was compounded when the home keeper was lobbed with a precision strike in the last minute. 3 points had suddenly been reduced to 1 and the destination of the league title is still uncertain. 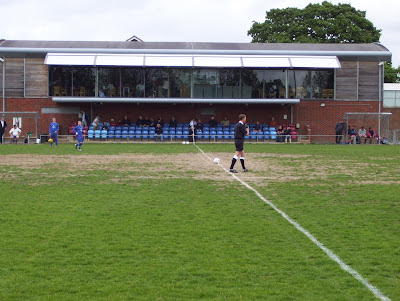 It appears that the match scheduled for Tuesday (Warlingham v Farnham Town) will have a bearing on who wins the title and the Pieman is seriously considering signing off the 2006/7 season with that one. Watch this space......... 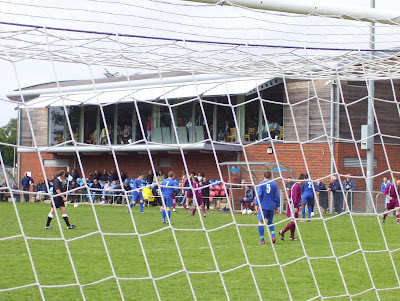 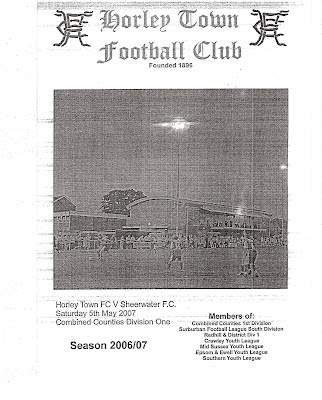 Attendance: 70
Admission: £4.00
Programme: (A programme was produced retrospectively and has been scanned by Colin Marshall)
Tea: 60p
Adnams Bitter: £2.30
Cheeseburger with Lettuce & Onions: £1.70
Fare: £3.10 from Zone 6 with Gold Card discount